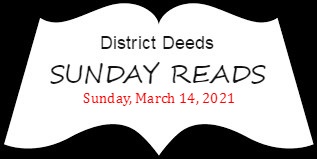 Since that time, the ill conceived Marten nomination has continued to unravel nationwide. A wide variety of individuals and advocacy groups have used Zoom meetings, interviews with reporters and politicians, phone calls, emails, websites, social media and news articles to expose the ugly Marten performance record of widespread incompetence and corruption.

We posted the page right above our District Deeds mast head shown in every post and page as illustrated below:

Yesterday was the 50th day since we launched the Marten Edu-Rap Sheet page.

For this Sunday Reads we decided to provide our District Deeds readers, who may have missed some of the postings on Facebook and Twitter, the compete list of offenses and evidence on that page to expose the widespread dysfunction, incompetence and corruption of Nominee Marten

The 50 days of posts not only tell the story of the massive damage Marten has done to a generation of Students and Families of Color, Special Needs, English Learners, and all SDUSD families suffering due to her ongoing mismanagement from 2013 through her poorly prepared/poorly planned/poorly deployed 2021 distance learning disaster.

The 50 days of posts also tell the story of thousands of SDUSD Employees, mostly union employees, who have had to work under intolerable conditions where they are forced to unethically cover up the corrupt actions of the toxic Marten administration at rick of losing their jobs.

Many of those employees have fought against that unethical corruption by providing information to District Deeds and other local news outlets to expose Marten.  Some of them just conceded their ethics and became Marten puppets, especially those in her White Woman Mafia leadership positions that had the most financial benefits to gain from Marten’s educational crimes.

So now the BIG lie told by Marten political cronies, hacks and other supporters is the ridiculous claim that the only opposition to Marten comes from Charter School Organizations and Advocates.

Hundreds of thousands of Parents whose children currently attend/support public schools and have protested the Marten nomination have proven those Marten sycophants as liars.

Numerous organizations that do not support Charter Schools have protested the Marten nomination and have proven those Marten sycophants as liars.

The truth is that Marten, through her incompetent and corrupt leadership has elevated the educational competitors of SDUSD and could have made her  “Charter School Innovator of the Year” as we said in New SDUSD Motto = “Quality CHARTER School in Every Neighborhood”.

The truth is that the toxic learning, teaching and administrating environment caused by Marten has driven the many Students, Teachers and Administrators away from the SDUSD to better run local public school districts, charter schools, and private schools in the San Diego area.

Many of the most at-risk Student populations do not have the financial capacity to go to an alternative school and are the continuing victims of the 8 years worth of Marten educational offenses we have listed below.

To address that educational crime, we have a call to action for our readers.

Until the Marten nomination is decided, please take the following steps:

San Diego Unified School District Superintendent Cindy Marten has been nominated to be the Deputy Secretary of Education. I urge you to vote no on her confirmation and have you urge your colleagues to do the same based on the following evidence:

Our next deputy secretary should be someone eager to improve educational outcomes for all students, especially students in failing schools, and with a track record of leading such improvements. Cindy Marten doesn’t pass the test.  #NoMarten

Cindy Marten is GUILTY of being incompetent in very item listed.

The following list will be increased multiple times per week so check back often for updates.

Evidence:  Did SDUSD Supt. Cindy Marten Plagiarize Her Motto From KIPP Charter Schools? You Be the Judge!!!

OFFENSE:  Total lack of transparency, cover up corruption, Lying to Stakeholders and Press, Training Staff how to illegally delete emails

Evidence: 1 IT Tech for 2,300 Classrooms – MILLIONS of Prop Z/S IT Investment Dollars at Risk Through Severe Layoffs in San Diego Unified Technology Support!!!

Evidence: “UP YOUR BOARD” San Diego Unified STAKEHOLDER Comments of the Week – Friday, March 9, 2018

Evidence: THE SDUSD – MARTEN “PURGE” HAS BEGUN! – Say Goodbye to Your Highly Qualified Principals and Vice Principals Before they Disappear! #survivethesdusd

Evidence: San Diego Unified Supt. Cindy Marten and Board of Education Celebrate the “Special Fright Inside Every Child” with Corporal Punishment!

The quote of the week is dedicated to all of the families nationwide that will suffer if incompetent, corrupt Supt. Cindy Marten is successfully nominated to Deputy Secretary of Education:

“Be Afraid, Be Very Afraid” – David Croneneberg (“The Fly”)