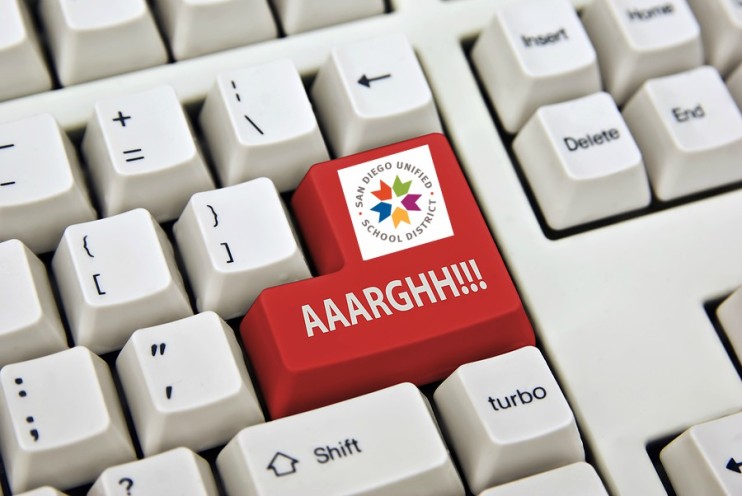 San Diego Unified School District Stakeholders and Taxpayers have repeatedly been conned into believing a “2020 Vision” of personalized learning through the technologically modern i21: 21st Century Interactive Classroom Initiative. by Supt. Cindy Marten and her crony Trustees.

“All of San Diego Unified’s students continue to learn using the latest technology and coordinating teaching strategies, again thanks to our voter-approved bond measures. The district’s i21 actually spills into other parts of the county under a program that allows us to donate older laptops and other devices throughout the community as we cycle in new technology to our schools.”  – San Diego Unified School District’s back-to-school initiatives -CW6 San Diego

Marten and her crony Trustees “Tricky Dick” Barrera, Kevin Beiser, John “You Can’t Handle the Truth” Evans, Mike McQuary and Sharon Whitehurst Payne throughout the   $124 million Cindy Marten budget disaster repeatedly said that they would keep budget cuts “as far away from the classroom as possible”.

Here is what Marten said on the SDUSD website:

“Superintendent Marten committed that the bulk of the budget reductions would come first and foremost from the central office – to keep the cuts as far away from the classroom as possible.”  Central Office -2017-18 Budget Update Frequently Asked Questions (FAQs)

Unfortunately the “vision” of a fully functional i21 Interactive Classrooms and the “keeping cuts as far away from the classroom as possible” mantra is really just an unsupported, unethical mirage and propaganda con job based on reports from San Diego Unified Parents, Teachers, Principals and Staff.

Only one month into the new 2017/2018 school year, the $124 million Cindy Marten budget disaster repercussions are directly harming student learning and achievement.

Through her complete lack of operational management experience, Marten recommended and her crony Trustees approved gutting the technical support for BILLION DOLLAR Prop Z/S initiatives like i21 and interactive personalized learning environments in over 7,000 classrooms in 180 San Diego Unified School District (SDUSD) schools and in over 200 front offices.

Gutting IT Support is rendering useless the expensive computer equipment that needs service and rapidly destroying i21 Interactive Classroom lesson plans in virtually every school in the SDUSD.

As we reported back on April 24, 2017, the $124 million Cindy Marten budget disaster caused massive Office-Technical and Business Services (OTBS) layoffs…

The ITSS is charged with the support, maintenance and training in over 7,000 classrooms and over 200 front office and administrative areas packed with i21 technology (Promethean Interactive Whiteboards, sound systems, teacher tablets, document camera’s, a computer-for-every-student stored in charging carts, desktop/laptop computers, printers) this year.

Prop S in 2008 and Prop Z in 2012 provided the San Diego Unified School District $4.9 Billion “to repair, renovate and revitalize district schools” according to the Facilities Bond Program: Propositions S & Z on the district website.

Included was the i21: 21st Century Interactive Classroom Initiative:

Supt. Cindy Marten financial and operational mismanagement has caused resulting layoffs and have put at risk millions of Prop Z/S dollars invested in equipment, hardware, and software along with massive amounts of operational and instructural classroom hours wasted because of technical down time.

Last year there were 20 IT Department technicians going out and covering the day-to-day issues and concerns in over 7,000 classrooms, almost all outfitted with i21 equipment. That was about 1 technician for up to 350 classrooms covering the needs of up to 9 to 10 school sites.

This year, in place of the 20 IT Department technicians, there are 3.

That is not a misprint…3 IT Department technicians for 7,000 classrooms and 180 school sites.

In other words, 1 IT Department technician for over 2,300 classrooms and 60 school sites.

There are over 200 front office and administrative areas in the district that require assistance with computers when it comes to maintenance and repairs, including printer repairs.  The offices have critical computer functions like budgeting, security, personnel, counseling, attendance, maintenance and communications.

Last year there were 6 IT Department technicians covering those needs or about 1 tech per 33 front office and administrative areas.

This year there are ONE THIRD of that total from last year…only 2 IT Department technicians covering those needs or about 1 tech per 100 front office and administrative areas.

The impact to School Sites and front office/administrative areas has been devastating.

District Deeds Whistleblowers at multiple school sites have reported that wait times for IT support in all areas has been dramatically extended.

Based on District Deeds knowledge of workforce management it is easy to predict that the service requests will grow exponentially as the 2017/2018 school year proceeds.

For example, based on the additional workload, we estimate that an IT Tech who finishes the assigned workload for the day may very well return to the office and discover 3 or 4 times that many newly added since the number of sites to cover has been increased that much.

Under this scenario, there is no telling how many service calls will stack up in a short time and make hundreds of i21 classrooms non-functional.

Remember – every day that any of the 7,000 i21 classrooms has a major malfunction in a Promethean Interactive Whiteboard, a Teachers computer or another critical important piece of equipment, Teacher effectiveness is being diminished by manual “workarounds” and Student learning is harmed.

Every day that a front office location is not fully functional, the workload on the reduced office staff (due to layoffs) becomes unbearable and both illness and attrition increase to make the efficiency even worse.

Last year, with 350 classrooms, 9 or 10 school sites, or 33 front office/administrative areas each, the IT Techs were busy but through effective scheduling protocols and best practice methods the workload was doable.

This year, with 2,300 classrooms, 60 school sites, or 100 front office/administrative  areas the IT Tech workload is impossible…and SDUSD Students and dedicated staff are the one who pay for the Marten operational blunder.

With impossible workloads, valuable and expensive equipment purchased with Bond Z and S funds with lay dormant and eventually grow obsolete without the needed technical support and thousands of expensive i21 instructional hours will be wasted.

So what is the solution?

Subcontracting SDUSD technical support is not possible because it violates the OTBS contract that says:

Section 4: CONTRACTING OUT/SUBCONTRACTING The District may contract out/subcontract work under the following conditions: A. The work is required by State law to be contracted out/subcontracted. B. The work is permitted by State law to be contracted out/subcontracted and is limited to work not usually or customarily performed by bargaining unit members, except wherein a practice of subcontracting currently exists. C. All contracted work shall require formal district review and approval, including any required plans, permits, inspections, and/or other agency approvals. It is understood that contracting out/subcontracting of work shall not result in the layoff or reduction of bargaining unit members or positions, nor shall it diminish the rights provided to laid-off unit members under the provision of Article 16, Layoff and Reemployment. – OTBS Contract

NONE of the duties we described above fit under the OTBS CONTRACTING OUT/SUBCONTRACTING guidelines.

In fact, our sources have told us that Greg Ottinger, the newly Cindy Marten appointed ITSS Executive Director has told district personnel that the SDUSD is NOT outsourcing any of the services we described because it would break the OTBS contract to do so.

The only viable, ETHICAL solution is re-hiring 15-20 IT Techs to both catch up the existing backlog and prevent another backlog to grow.

Our guess is that the UNETHICAL Marten will just break the OTBS contract and subcontract support to one of her crony vendors and make employees fight her multi-milion dollar Legal Department in court.  Under Marten, the SDUSD LOVES lawsuits from employees and families they can unethically try to bully into settlements.

Meanwhile, what will fail first?

What will fail first at YOUR school or YOUR SDUSD workplace…and what Students and Staff will be harmed because of this gross IT Staffing mismanagement by the Marten led SDUSD senior staff and crony Trustees?

Send us an email at districtdeeds@gmail.com and let us know!!!

12 thoughts on “1 IT Tech for 2,300 Classrooms – MILLIONS of Prop Z/S IT Investment Dollars at Risk Through Severe Layoffs in San Diego Unified Technology Support!!!”