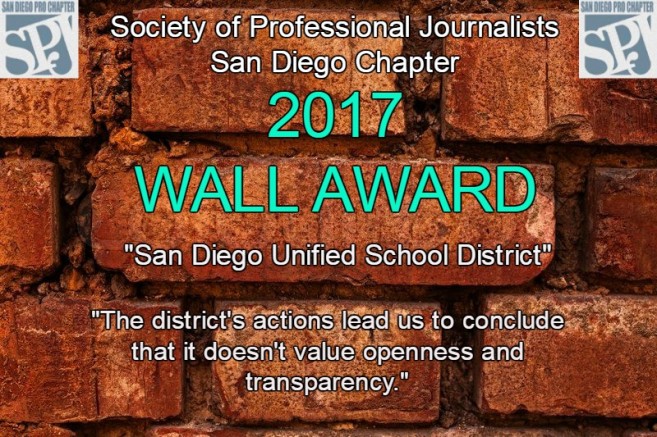 In what might be considered the most obvious “News Flash” since San Diego Unified (SDUSD) Superintendent Cindy Marten was appointed, the San Diego Chapter of the Society of Professional Journalists (SDSPJ) have bestowed the SDUSD their annual “Wall Award” for being the worst government entity in the San Diego area for “openness and transparency”.

Here is the official announcement from the SDSPJ website:

The San Diego Unified School District is the recipient of our Wall Award. District officials were too often at loggerheads with local journalists this past year, starting in June with a public information officer making, and repeating, a joke about a reporter’s dead body. When 10News sought information about student safety and missing inventory items, the district withheld documents that other school districts delivered within weeks. And when Voice of San Diego sought to understand how local schools reached a record-setting graduation rate, the district ignored repeated requests to meet in person to explain. More recently, when district officials began openly discussing hundreds of potential layoffs, its announcement lacked specifics that reporters and parents alike deserved to know. The district also declined an on-camera interview with NBC San Diego for a story about lead in drinking water and then, as one reporter put it, “pushed back” from its Twitter account. The district’s actions lead us to conclude that it doesn’t value openness and transparency. We hope it receives this award in the spirit that it is intended and, in the future, forges a more constructive relationship with journalists and the public. – SDSPJ

District Deeds has been exposing the total lack of transparency by Supt. Cindy Marten and the Board as far back as our 2nd post on June 28, 2014 titled “Tick…tick…tick…BOOM – Blurred “Vision” by Marten Successfully Derails SCPA – More Derailments to Come“. when we said:

“I guess “Public Comment” is just a good time to take a nap for this Superintendent and Board after a long 3 hour opaque secret session where the REAL transparency and “collaboration” occurs.”

In 2016. District Deeds reported the SDUSD “reporter’s dead body” toxic approach to the press in “San Diego Unified CIO “Body Wash Up On Shore” Comment More Real Than You Think!”

The examples posted in the SDSPJ announcement seem like a lot at first glance, but the full scope of the Marten administrations total lack of transparency with the full support of Board Trustees Richard Barrera, John Lee Evans, Kevin Beiser, Sharon Whitehurst-Payne and Mike McQuary  is grossly understated.

From the San Diego Grand Jury Response cover-up, to the fake Principal Selection Process and fake Graduation Rate manipulation to outright lies to stakeholders in all the SDUSD Committes (DAC, GATE, CAC, DELAC, etc) and Communities (Lincoln, Hoover, Scripps Ranch, Mission Bay, Morse, etc)  to Media Blackouts and the current fake “structural deficit” lie about her $124 million financial management disaster, the Marten legacy of lies cover-ups and lack of transparency has become legendary in the span of the 4 short years she has been in charge.

Marten has successfully betrayed and alienated virtually every Stakeholder group in the SDUSD.

District Deeds congratulates the SDSPJ for exposing the SDUSD lack of transparency but we caution them against hoping SDUSD “forges a more constructive relationship with journalists and the public.”

There is no media “award” that can provide that hope.

The only hope for the SDUSD Stakeholders is a Board of Education Special Achievement Pink Slip Award for her significant contribution to the total financial and operational mismanagement of the SDUSD..and it needs to be given to Supt. Cindy Marten immediately before she can do any more harm to Students, Teachers, Principals, Staff, Families, Communities and Taxpayers.