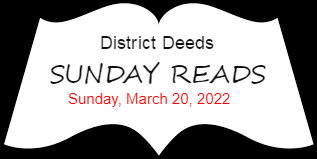 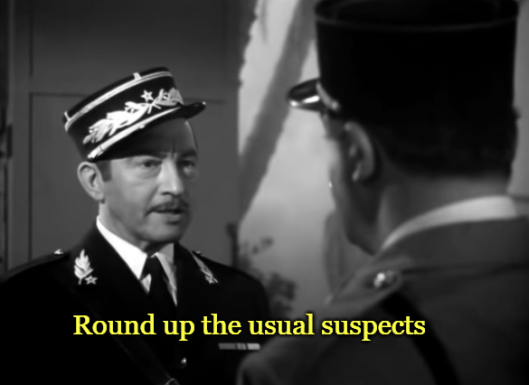 Unlike the SDUSD Trustee Candidate “Usual Suspects” we referred to in our January 9, 2022 Sunday Reads, this is our attempt to gather the usual “news” suspects in today’s Sunday Reads article via a compilation of 3 national, state and local sources regarding the veracity and value of SDUSD graduation rates since the Covid 19 pandemic took hold in March, 2020.

This week, for the sake of conciseness, we have selected the relevant passages from the 3 news sources related to the past year (2021) and the projected 2022 SDUSD graduation rate propaganda but we strongly urge our readers to click on each of the titles (in red) to read the full articles for themselves.

This story is a collaboration with The Associated Press.

High school graduation rates dipped in at least 20 states after the first full school year disrupted by the pandemic, suggesting the coronavirus may have ended nearly two decades of nationwide progress toward getting more students diplomas.

The drops came despite at least some states and educators loosening standards to help struggling students.

The results, according to data obtained from 26 states and analyzed by Chalkbeat, are the latest concerning trend in American education, which has been rocked by a pandemic that left many students learning remotely last year and continues to complicate teaching and learning. Some fear that the next several graduating classes could be even more affected.

“It does concern me,” said Chris Reykdal, the schools superintendent in Washington state, where the graduation rate fell by about half a point. “I don’t ever want to see a decline. We’ve made such steady progress.”

In 2020, when schools shuttered for the final months of the school year, most states waived outstanding graduation requirements and saw graduation rates tick up. But the picture was different for the class of 2021. In 20 of 26 states that have released their data, graduation rates fell. Comprehensive national data will likely not be available until 2023.

Those declines were less than a percentage point in some states, like Colorado, Georgia and Kansas. Elsewhere, they were larger. Illinois, Oregon, and North Dakota saw graduation rates drop 2 points, and Indiana, Maine, Nevada, South Dakota, and West Virginia saw declines of at least 1 point. 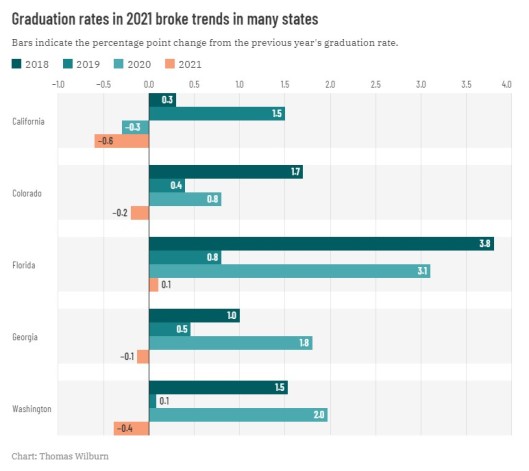 “We do have to be concerned that grad rates are down and that some number of kids that earned a diploma, they’ve learned less than prior years,” said Robert Balfanz, a professor at the Johns Hopkins School of Education and director of a research center focused on high school graduation. “What we’re going to have to learn in the future is, how great is the concern?”

California high school graduation rates didn’t change much last school year compared with the previous year, according to data released by the California Department of Education earlier this month. The state graduation rate increased less than 1 percentage point — from 90.7% to 91.3%.

That number excludes schools with Dashboard Alternative School Status, which are county Office of Education-run jail and special education programs, continuation schools and other schools, including charter schools, that serve a high percentage of students at risk of dropping out of school because of credit deficiencies, a high level of transience or various other obstacles in their lives.

The state has determined that schools with this designation are not comparable to other K-12 public and charter schools. If the graduation rate of DASS schools is factored into the total, the statewide graduation rate would be 84.2%.

The numbers might seem surprising considering the 2020-21 school year consisted primarily of students attending class at home over Zoom, but state flexibility may have helped keep the graduation rates from falling. State lawmakers allowed parents to request that D’s and F’s earned that school year be changed to pass or no-pass grades and offered students the option to take a fifth year of high school if needed.

Many districts also allowed last year’s juniors and seniors to graduate by meeting the state’s minimum requirements — made up of 13 courses totaling about 130 units — rather than the higher number of units most districts require.

“It’s quite diminished requirements,” said Russell Rumberger, a professor emeritus of education at UC Santa Barbara. “In a way, that has always been the case. I’ve looked at it nationally. California has one of the lowest state requirements of any state in the country.”

The disparity in graduation requirements among districts makes it difficult to know what a student’s diploma represents, Rumberger said. A person with the same number of units could be a graduate in one district and a dropout in another, he said.

Despite that, Rumberger said, he is concerned about the impact of lower diploma and course requirements on college-bound students. He worries some won’t have the content knowledge to be successful.

It’s not clear how many students requested pass/no pass grades or to graduate with fewer units because the California Department of Education does not track that information.

“It is true that the academic experience during the pandemic is different, absolutely, but we don’t know if there is any way to know if there is a dip in preparation,” said State Board of Education President Linda Darling-Hammond.

An increase in the state’s five-year graduation rate showed that many students took advantage of expanded summer school programs and added credit recovery programs offered by their school districts to get their diplomas, Darling-Hammond said. The five-year graduation rate tracks all the non-graduates from the preceding year to determine how many graduated after a fifth year of high school.

State Smarter Balanced assessments and diagnostic tests given at schools show that high school students last year did as well as or better than students in prior years, Darling-Hammond said. She said the pandemic and accompanying distance learning took more of a toll on younger students than on high school students.

“We can wring our hands a lot, and there are a lot of reasons to be worried, but I don’t think we have a lot of evidence that they are substantially behind,” she said.

San Diego Unified is predicting a whopping 95 percent graduation rate this year, partly because it expanded opportunities for students to recover course credits and because of a state law that temporarily relaxed graduation requirements due to the pandemic.

If the projection stays true, it would be the district’s highest graduation rate since the state started calculating graduation rates this way in 2017, amounting to a 6 percentage-point jump above last year’s rate.

In the four years prior, the district’s graduation rate had risen by only two percentage points total.

The graduation rate also is expected to be so high because the district has been getting more students to take its credit recovery courses.

“Our credit recovery program has really helped us tremendously,” said school board President Sharon Whitehurst-Payne at a board meeting Tuesday.

Students could take credit recovery classes online or in person, DeWitt said, but online classes were mostly meant for students who were already enrolled in the district’s virtual academy and for students preparing for college sports.

The district also changed the way it offered summer school to allow students to recover more credits and more quickly.

Last year summer courses were offered in two three-week sessions rather than one six-week session, as the district has typically done. The district also allowed students to recover up to four credits during the summer, rather than the typical two credits, DeWitt said.

As a result, students earned more than 14,100 credits toward graduation during summer school credit recovery last year, compared with 1,300 the summer before.

Students who took summer school last year because they were at risk of not meeting academic standards were given significantly higher marks during summer credit recovery classes than during the regular school year, district data show.

When asked why there was such a change in results, DeWitt said it’s because last summer was the first time summer classes were changed to comply with the district’s new grading approach, which seeks to eliminate non-academic factors from grading, such as whether a student completes homework or other busy work.

“We’re not so much focused on the breadth but the depth,” DeWitt said.

San Diego Unified plans to offer this modified summer school program once more this year, again paid for with pandemic funds. In addition, the district says it will use about $13 million in state grants to offer more credit recovery, identify students earlier on for credit recovery, track students’ progress to graduation, and provide tutoring, mentoring and internship programs.

While the overall graduation rate is expected to be high, some students were left far behind.

Students who are learning English and students with disabilities still averaged 71 percent graduation rates, 24 percentage points below the district average.

San Diego Unified also recently released data that shows student grade trends appear to be returning to pre-pandemic levels, after a surge of D and F grades last year when schools spent most of the year in remote learning.

In fall 2020, about 22 percent of all grades given to high school students were D’s or F’s. That fell to 17 percent in fall 2021, which is closer to the 15 percent average during the semester just before the pandemic hit.

OK…we know…lots (maybe too much) of conflicting data and information from 3 different levels of reporting…national, state and local, but bear with us!  Each of the articles provides clues that clearly expose the ongoing graduation rate corruption being promugated annually by the SDUSD…and the SAME amped up massive graduation rate corruption deployed in the time of Covid.

First let’s quickly define the BASELINE quality of Education during the time of Covid has permitted this 2022 Graduation Rate Miracle: 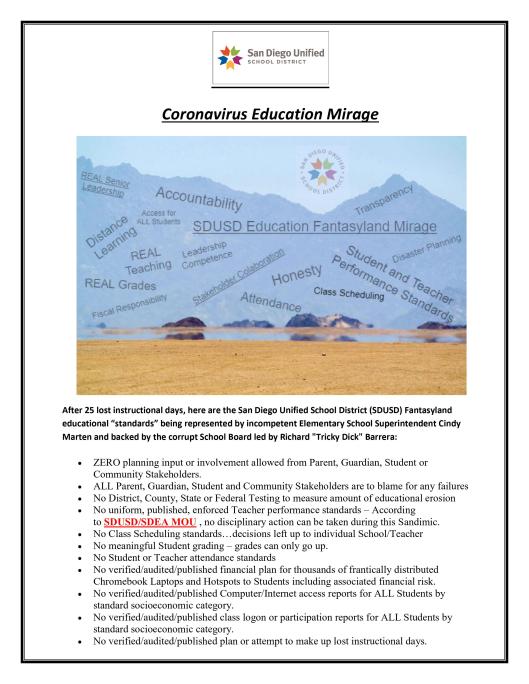 The logic that ALL these setbacks to Student learning would negatively impact graduation rate…but that is only if actual LEARNING was a criteria for graduation.

However in the SDUSD, learning is NOT a criteria for graduation as we proved back on September 17, 2017 in an article titled “REALLY RICHARD?!? Exposing Ridiculous SDUSD Trustee President Barrera Grad Rate Con Job!”

Now let’s look at “facts” from the articles.

District Deeds Translation:  State Board of Education President Linda Darling-Hammond, whose sponsored “Positive Outliers Report” was totally debunked by Whisleblower “Inside Unified” and who is a major BFF of classically incompetent and  corrupt former SDUSD Supt. Cindy Marten finally admits that she doesn’t know what she is talking about…at least pubilcly.

District Deeds Translation:  Helped who?!?  NOT your constituents in District E who, because of your corruption, now have much tougher path avoiding the school to prison pipeline because YOU have NOT fought for a FULL education to ensure success in college or the workplace.

Instead you and your corrupt fellow trustees had no disaster recovery plan, amped up your existing tactics to falsely pump up graduation rates to avoid accountability, and have given SDUSD Students a useless diploma backed by negligent reporting.

Not a “miracle”, just another corrupt SDUSD Mirage!

And “tremendously” disastrous for Students!

Shame on you and your local press minions!

Now for our quote of the week dedicated to the corrupt SDUSD leadership who has effectively destroyed the expectations of thousands of SDUSD Students by allowing the lowest of the low graduation requirements for their own political gain: