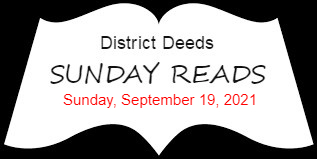 This past Wednesday,, September 15, 2021 began Hispanic Heritage Month.  As usual, the San Diego Unified School District (SDUSD) pumped out a patronizing propaganda press release instructing “all students, staff, and San Diego families to deepen their understanding of the Latinx community” even though LatinX Students and Families represent the largest ethnic group in the SDUSD.

This week, in honor of Hispanic Heritage Month, Sunday Reads highlights an article from La Comadre that talks about a major shortfall in the SDUSD…”Closing the Latinx Teacher-Student Gap”

t’s Hispanic Heritage Month again, which means you’ll be seeing Latinx history and pride plastered all over businesses, political campaigns, social media, and even schools. Don’t get me wrong, this isn’t a bad thing. The Latinx community should be celebrated and our contributions should get the recognition they deserve. However, discussing Latinx issues doesn’t end in October because many of us live these realities on a daily basis.

An issue that definitely does not get enough action year-round is the Latinx teacher-student gap. Latinx students are the fastest-growing ethnic population in public schools across the nation, with over 25% of students in classrooms being Latinx. While I’d like to tell you that it’s a victory for the number of K-12 Latinx teachers to have quadrupled since the ’90s, this increase does not even come close to rising student populations. According to the California Department of Education, more than 50% of students in public schools in California are Latinx, but only 20% of teachers are Latinx.

In a 2015 report by the American Community Survey, we see that the gap between teachers and students is the most severe for Latinxs, among all other ethnic groups.

So why does this gap matter? Well, there’s already so much research that shows how having more teachers of color positively impacts both students of color and white students. Teachers of color often better understand the needs of students of color and white students benefit from these cross-cultural interactions. But let’s talk specifically about Latinx students. The majority of Latinx students are likely to have parents who are immigrants or they might be immigrants themselves. Additionally, the majority of these students are bilingual or English learners. Teachers who understand the adversity that comes with these identities are more likely to understand why a student might be struggling in school, rather than simply writing that child off as a bad student. Furthermore, by having more Latinx teachers in the classroom, the growing Latinx student population has role models to look up to.

So what can we do about it? Structural changes need to be made to empower Latinx students to not only make it to college but make it through and graduate. Our education system needs to do better by allocating more funds towards helping Latinx students become educators. Another solution is for school districts and charter schools to actually hire Latinx teachers! I know a lot of these solutions sound complicated, but it starts with having conversations. This Latinx Heritage Month I encourage all of you to ask the educators, school administration, and policymakers in your life about what they’re doing to close the Latinx teacher-student gap.

The La Comadre article makes a very simple, but very relevant statement that applies directly to the SDUSD:

Another solution is for school districts and charter schools to actually hire Latinx teachers!

Statistically the case for hiring more Latinx Teachers in the SDUSD is extremely strong.

Even according to the pro-SDUSD Propaganda document created by UCLA titled “Giving Learning and Graduation New Meaning: One Student at a Time” the intentional decision to NOT hire Latinx Teachers is overwhelmingly obvious.    Appendix A: Demographics and Staffing of SDUSD from that study proves the point:

Page 1 of Appendix A shows the Latinx Student population:

Page 2 of the UCLA SDUSD propaganda report positions the SDUSD Staffing in a much different way to better position the legacy White Woman Mafia hiring practices for teachers in the SDUSD.  Instead of percentages by race for Teachers like they did with the Student data, the UCLA propaganda report used raw numbers.

Here is Page 2 of Appendix A: 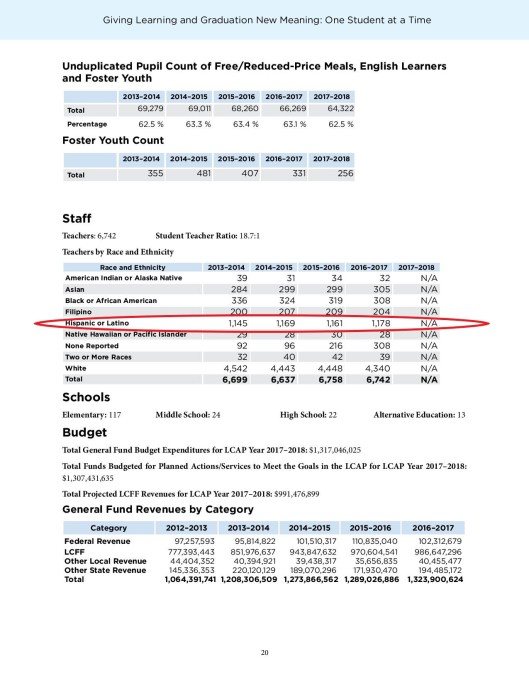 To overcome the positioning propaganda, here is the percentage breakdown of the numbers using the most recent 2016/2017 staffing numbers from the report:

The preferential “white” hiring practices by the SDUSD at the expense of the Latinx community is obvious.

It is almost as bad for African American Teachers seeking to be hired by the SDUSD:

Obviously this is not the fault of the Teachers being hired, either the White teachers who are hired or the Latinx or Black/African American Teachers who are denied employment by the racist SDUSD.

This is the fault and the responsibility of the operational management of the SDUSD, from the Superintendent on down.

So how does the SDUSD Board of Education, led by corrupt, Latinx Trustee Richard “Tricky Dick” Barrera (who has betrayed his Latinx constituents daily since being elected in 2008), feel about the performance of the SDUSD Superintendents in equitable hiring practices for teachers?

Like usual, there is a lot of written propaganda and declarations with ZERO documentation of actual goals or performance metrics.

A Superintendent Evaluation was posted on the SDUSD website on September 14, 2021 that contained the following “Explanation of Levels” for the Superintendent performance

According to that evaluation, the only item in the twelve vague “Area(s) of Focus”  listed on the evaluation is item 2: “Improve Hiring Practices” with no definition in the document as to what the racist SDUSD considers an improvement!

Apparently there were OTHER goals assigned to the gratefully departed Marten, one of which stated “staffing diversity”  That additional “Goal” had no definition as to what “staffing diversity” actually means in the racist SDUSD or any metric by which Marten was to be measured.  Of course the ACTUAL staffing by “Race and Ethnicity” was not provided.

We are left to trusting the corrupt leadership with no data or documentation.

For all we know, based on the record of the racist record of the Board of Education and senior leadership,  “Improve Hiring Practices” might mean hiring more white Teachers!

In any case, the corrupt Board of Education gave Marten the TOP “Extending” rating on that item as a parting gift with no proof or documentation to support it.

Goal 1 – Cultivating Inclusive, Anti-Racism and Restorative Schools, Classrooms and District with Equity at the Core and Support for the Whole Child:
● Increasing Achievement for Underperforming Students
● Ensuring Social-Emotional Learning

Lots of flowery words and sentiments with ZERO existing or promised documentation.

A few quotes from Tricky Dick Barrera in the San Diego Union Tribune say it all:

“We try to stay consistent with goals we set for at least a few years,” Barrera said. “If you keep changing your basic goals, you’re never going to get a sense of whether or not you’re growing or improving.”

“We never say that we have succeeded and that we‘ve completed our work around any issue, and we also never say we have failed,” Barrera said. “It’s always a question of where we are in the process.”

“We never substantially define or change our vague goals so we can never be held to transparency or accountability.  Since there are no real goals, no one can claim we failed and, through millions of dollars of paid and free local press propaganda using black and brown students as props, we can imply success where no success exists.”

The fake evaluation is just another corrupt SDUSD lie waiting to happen and poised to educationally damage a new school year worth of Students, especially Students of color who have no Teacher mentors of their own.

Now, for the “Quote of the Week”  that exposes the ongoing betrayal and lies of Trustee Tricky Dick Barrera to his electoral community:

We need to help students and parents cherish and preserve the ethnic and cultural diversity that nourishes and strengthens this community – and this nation. – Cesar Chavez