As a special feature District Deeds is proud to present a single article and study that exposes the serious void in senior leadership in the San Diego Unified School District and clear examples of that void through their words and actions.  The following is a comparison of ideal leadership versus the current dysfunctional, corrupt SDUSD leadership of Superintendent Cindy Marten and Trustees Tricky Dick Barrera, Beiser, Evans, Payne and McQuary.

Quotes and Information from Article and Study:

How do you lead educators, students and administrators in today’s challenging environment? Does your leadership style help people to grow and become more autonomous?

Of all the different leadership styles, the servant leader is the one that is most likely to achieve this goal. Let’s take a deeper look at this remarkable leadership style.

With this basic attitude, the leader acknowledges that he/she doesn’t know everything, that employees also have valuable knowledge and experience to contribute.

A great leader has the ability to accept others and relate to their feelings and what motivates them.

This is what leadership is about – providing direction. Everyone should know what is expected from them, what their particular goals are.

Dierendonck sees stewardship as the willingness to take responsibility for the larger institution and to focus on service instead of control and self-interest.

What a refreshing concept…Servant Leadership by the Superintendent and Board of Education in a school district that empowers Parents, Principals, Teachers, Students, District Staff and all Stakeholders with humility, authenticity, interpersonal acceptance, strong mission and vision direction and unselfish stewardship.

The article mentions a study titled “6 Key Servant Leadership Attributes” by Professor Dirk Van Dierendonck that really drills down into the concept.

Let’s break down how San Diego Unified School District (SDUSD) Elementary School Superintendent Cindy Marten along with Board of Education Trustee Richard “Tricky Dick” Barrera and the rest of the Board of Ed Trustee cronies Kevin (Under Investigation) Beiser, John Lee (Under Qualified) Evans, Sharon  (Under Prepared) Whitehurst Payne and Mike (Under Fog) McQuary measure up using both the featured article and the study.

Empowering and developing people – The key issue with this point is whether it is possible for a Monarch Marten or a Dictator Barrera to empower and develop their oppressed subjects.

Between firing highly qualified Principals and having the majority of highly skilled Administrators and Teachers flee the SDUSD, there is no inclination to empower their remaining employee “serfs”.  The only “serf” development occuring is how to stay employed and far away from the ruthless Marten wrath.

The main way to avoid persecution by Monarch/Dictator Marten?

As one SDUSD employee told District Deeds: “I keep my head down and my mouth shut”.

What a horrible learning environment for SDUSD Students…no wonder they are fleeing to Charter Schools!!!

Humility – Humility from District Spokesmodel Marten  or Tricky Dick Barrera?  You have got to be kidding!  Between staged photo ops with students of color in the Ice Bucket Challenge…

To joining arms together for an undeserved award…

It isn’t enough for Marten, Barrera and their Trustee cronies to damage the education of thousands of SDUSD Students through financial and operational mismanagement …they have the compelling need for propaganda gratification…the need to put their faces in front of a camera every chance they get to actually celebrate their incompetence…how disgusting!

Authenticity – Marten, Barrera and their gang use the word “authenticity” to describe virtually every ill-conceived initiative they deploy.  Again, one picture is worth a thousand words… 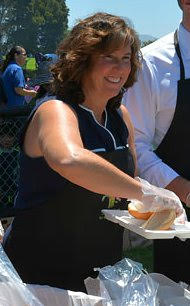 Hypocrite ESS Cindy Marten playing the role as a food service worker for a photo op while cutting low wage food service positions because of her $124 million budget mismanagement disaster.

Interpersonal acceptance – When we think of Marten, Barrera and their gang of Trustees on this characteristic “to accept others and relate to their feelings”, her testimony in the Green Elementary court case come to mind.  As we described in our post relating to the Marten deposition in the Green Elementary trial, here is Marten (A.) answering question on the transcript:

Yes SDUSD Stakeholders, this is your SDUSD Superintendent Cindy Marten expressing her version of “Interpersonal acceptance” by showing Parents and Students of the SDUSD that winning a court case is much more important that having the moral fortitude to honestly “relate to their feelings” and protect their children from sexual abuse.

Providing direction –   In our post titled “Marten Continues to Steer the SDUSD Down the Road to Disaster” on September 12, 2014, little did we know how prophetic our story woule be.  Again, a simple picture shows how Marten, Barrera and their gang of Trustees have provided “Direction” from the very start…

The MRAP debacle…and yes…that is “San Diego Unified School District” name plastered above ther large “POLICE” sign on the side of the MRAP.

Nothing like a military vehicle on SDUSD school sites to “Provide Direction”.  This could only happen in the dystopian SDUSD world of incompetence from the start by ESS Marten and Tricky Dick Barrera.

Stewardship: is the willingness to take responsibility for the larger institution and to focus on service instead of control and self-interest. Leaders should act not only as caretakers but also as role models for others.

Total lack of “Stewardship” in the SDUSD leadership cannot be better illustrated than the Board Meeting on September 29th, 2015 that began the ouster of former Trustee Marne Foster.

On that night SDUSD ESS Marten and Board of Education decided to investigate the wrongdoing of Marne Foster (some offfenses of which Marten and Board Members participated in) including from our post:

Quite a breech of Stewardship made exponentially WORSE by honoring Foster on the SAME NIGHT with a SDUSD Board of Education Proclamation HONORING Foster!

At the time, to justify honoring the horrible role model Marne Foster was to thousands of SDUSD Stakeholders, Trustee Tricky Dick Barrera said: ““I’m concerned there’s a single story getting out there about Marne.”

A “single story” regarding multiple cases of corruption and improper school site intervention and damage with the full support of her accomplice, Superintendent Cindy Marten.

“A leader must be a good listener. He must be willing to take counsel. He must show a genuine concern and love for those under his stewardship.”
― James Faust