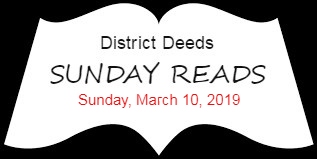 Perspectives and Reflections From Latino Teachers

America is experiencing a diverse, cultural shift and the teacher workforce is lagging behind: While Latino students make up 25 percent of the U.S. student population, and that percentage is growing rapidly, just 8 percent of the nation’s teachers identify as Latino. And although greater numbers of Latino teachers are entering the classroom, they, like other teachers of color, are leaving the profession at higher rates than their White peers.

Our Stories, Our Struggles, Our Strengths expounds on the challenges of Latino teachers, who are:

We spoke with more than 90 Latino teachers in a series of nationally representative focus groups, adding rigorous qualitative data to the ongoing national conversation about teacher diversity. The purpose of these focus groups was to better understand Latino teachers’ experiences separate from the broad category of teachers of color, including why they teach, what they believe they bring to the classroom, and what challenges they face in the workplace.

Understanding the differences among teachers of color is critical for diversifying the workforce. The Latino men and women educators with whom we spoke represent a multitude of ethnicities, nationalities, and races. They serve as community resources, advocates, role models, and educators, creating empowering and empathic spaces for parents and strengthening educational opportunities for students.

Despite their strengths, however, Latino teachers face discrimination and stereotyping that leave them feeling discouraged and inferior as educators. By examining these dynamic experiences of Latino teachers, all educational stakeholders can begin to develop supports and working environments aimed at increasing the number of Latino teachers in the workforce and, more importantly, retaining them. This is imperative for building a truly diverse workforce capable of serving an increasingly diverse student population.

This an outstanding article and accompanying study we urge ALL our readers to review.  Although we have no access to the actual number or percentage of Latino men and women Educators in the San Diego Unified School District, we would not be surprised if there is a lack of those educators based on the “White Women Mafia” tendencies of Elementary School Superintendent (ESS) Cindy Marten.

Add to that inherent bias by ESS Marten the fact that there is currently an oppressive and toxic work environment due to Martens’ financial and managerial incompetence and the SDUSD is a recipe for professional disaster for any Latino educator…or for any other educator!  Unfortunately whatever the Latino educator deficit in the SDUSD, we cannot recommend that any teacher of any nationality work under this oppressive Marten dictatorship.

The article and study further validated the value of Latino educators for us…we are sure it will do the same for you.

Can Schools Be Guilty of Educational Malpractice?

I woke up this morning thinking about my K-12 classmates and the students that I taught during my K-12 and higher education career. More specifically, I thought about the students that were failed by the system. This led me to reflect on a single question: Can schools be guilty of educational malpractice? Keep reading to find out.

To begin, the students that I speak of came to school every day ready to learn but were written off their teachers and administrators because of learning and behavioral disabilities. It’s ironic that the students who need the most support and attention, often end up receiving the least of it. How does this happen?

Who cares if the students who needed the most help, can coast along, receiving inflated grades to hide the fact that they are not learning? This only becomes apparent when standardized test results are released, and we find out these students are operating at a basic level.

Unfortunately, no one pays attention, and since the abolishment of NCLB (No Child Left Behind), there is no way to hold schools accountable for teaching all students. Not that I was a fan of NCLB, but I feel like ESSA (Every Student Succeeds Act) “threw out the baby with the bathwater.” Several provisions in NCLB made it impossible for schools to ignore certain segments of its student population.

For instance, schools had to improve show AYP (adequate yearly progress), to be considered successful. This means that the academic proficiency of the entire student population and its subgroups must show growth from year to year. The level of student growth that schools needed to show was always known way before the school year began. If they didn’t meet their targets or goals, there were stiff consequences, including school funding cuts. Unfortunately, many of these targets and goals were unattainable in the first place, but they could have been reconfigured, not abolished.

The mention of the days of the No Child Left Behind (NCLB) reminded us of an article in the La Jolla Patch that quoted ESS Marten right after she was illegally (violation of Brown Act) appointed SDUSD Superintendent:

“As Cindy Marten tells it, the war on public education was declared Sept. 17, 2000—by George W. Bush in the library of San Diego’s Central Elementary School.

Running for president, Bush used the “Central Miracle” of vastly improved test scores among poor children as an example of what he’d do in office, said Marten, superintendent-designate of the San Diego Unified School District.

“He said: Look, if it can happen here, it can happen anywhere,” Marten recalled in a visit Wednesday night to the La Mesa-Foothills Democratic Club.

“What I believe happened is he unveiled what later became No Child Left Behind—which was the beginning of the end of public education as we know it.”

The prediction of Marten came true…but not in the way she thought.

What District Deeds believes happened when Marten was illegally appointed Superintendent is that she declared war on public education and unveiled what later became the beginning of the end of public education in SDUSD as we know it.

Marten has embraced the fact that, as the Edvocate article mentions, without NCLB,  “there is no way to hold schools accountable for teaching all students.”  She has done everything in her power to avoid accountability at the educational expense of thousands of the neediest SDUSD students.

So, instead of only SDUSD Schools being guilty of educational malpractice, Martens’ unethical operational and financial incompetence has essentially made a whole SCHOOL DISTRICT GUILTY OF EDUCATIONAL MALPRACTICE!

It is time for “soldier” Marten to do the one thing that can end the “war”:

Marten must take a dishonorable discharge and move as far away from the SDUSD as possible.

I’m starting to sour on “authentic engagement” of kids in civic education, a concept I’ve long supported, and occasionally supervised and even led as a teacher. Preparing young people for active and engaged citizenship is an essential and neglected purpose of public education. How best to cultivate these qualities in school, however, is far from settled. In some circles, it takes the form of encouraging children to be directly involved in activism and advocacy, ostensibly student-led. But that’s morphing from a valuable instructional strategy into a manipulative and cynical use of children as political props in the service of causes they understand superficially, if at all.

It’s hard to define when involving children in advocacy and activism crosses the line and loses its claim to educational value, but you know it when you see it. A video posted on Twitter last month showed striking Oakland, California, teachers chanting, “Students, students, what do you see?” Small children respond, “I see my teachers standing up for me.” No less out of bounds is the use of children as political props in the charter school sector, where kids routinely miss school to attend high-profile rallies and protests. A few years ago, I chaperoned one such charter school trip to Albany, New York, at one point accompanying a small group of elementary school kids and their parents to “lobby” a mercifully indulgent state senator—an awkward and unproductive meeting that made the Feinstein affair sound like Question Time in the British Parliament. Neither the kids nor the parents had the slightest inkling of why they were there other than to pose for a photo op. It would be dishonest to claim any caloric content whatsoever for the children.

What caught our eye in this article was the concept of using Students as props.

This is an SOP (Standard Operating Procedure) for the SDUSD propaganda department to ‘humanize” self serving, incompetent ESS Cindy Marten…but it doesn’t stop with just Students.  Here are some pictures where it is possible that the human props didn’t have “the slightest inkling of why they were there other than to pose for a photo op.” 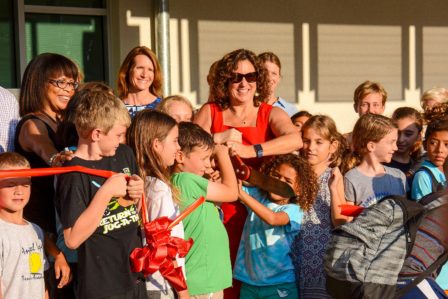 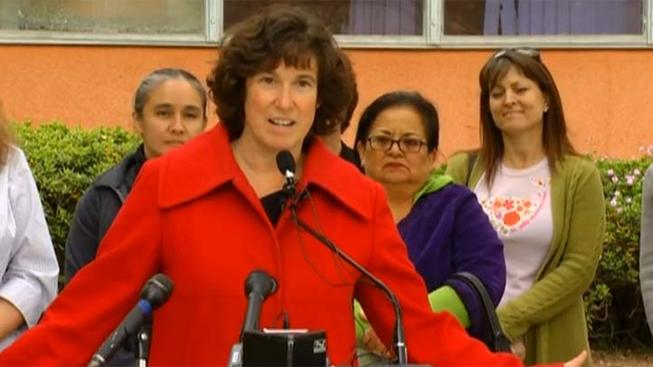 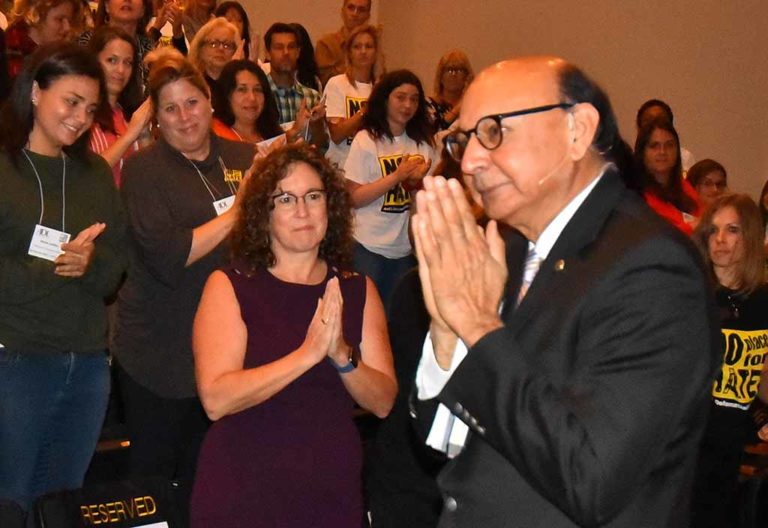 Families of color as props: 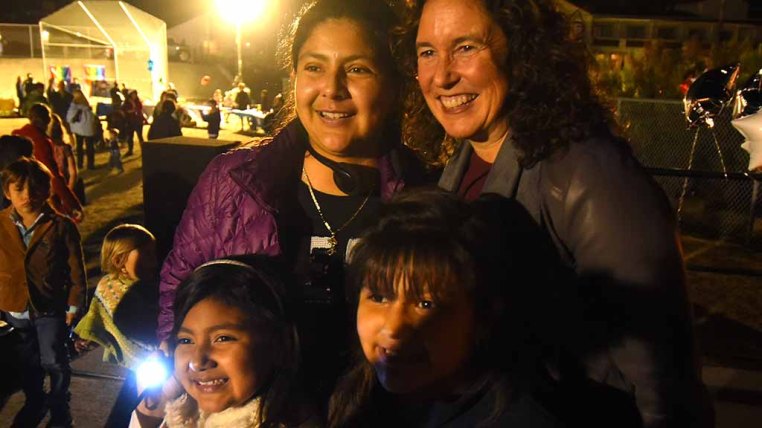 Even corrupt Politicians as props: 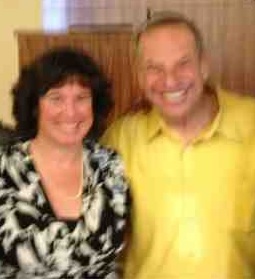 We urge ALL SDUSD Stakeholders to refuse to be objectified as just a prop in a propaganda picture for the educational dumpster fire created by ESS Marten, the WORST Superintendent in the history of the the SDUSD.

Now for our Quote of the Week that capsulizes the mentality of current SDUSD ESS Cindy Marten:

“Unless you can fake sincerity, you’ll get nowhere in this business.” – Roger Stone

CAN SCHOOLS BE GUILTY OF EDUCATIONAL MALPRACTICE?