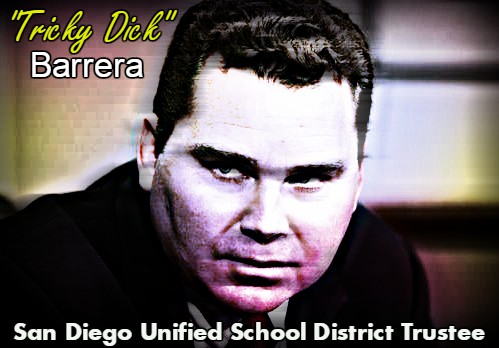 As usual, Barrera, Marten and their backers have no shame.

They use Students as props for their scare tactics of lead poisoned water and recycled Prop S and Z lies promising “Repair and Safety for Our Schools”.

But their lies and deception does not stop there.

They brag about the fake, discredited graduation rates created by unproctored online credit recovery and tell MORE lies regarding unreported drop out rates.

They top it all off by claiming YY “requires tough, independent oversight and all money spent locally”

What a joke…and a bald-faced lie!

Tricky Dick and Pathetic Cindy have a long history of cover-ups and lack of transparency regarding financial blunders.

But many SDUSD Stakeholders have seen through these Tricky Dick Barrera scams and there has been some great commentary on these issues.

Community Voices for Education listed the following 7 reasons you should vote no on Measure YY:

#1: In the last 20 years (and as recently as 2012) the SDUSD has received 3 voter approvals to issue $6.4 billion in bonds.  In the districts own words this will total approximately $12 billion with the YY proposal for an additional $3.5 billion costing $7.5 billion for a total of $19.5 billion to be paid over 40 years.

#2: This bond proposal will bring $247 for every $100k of assessed home value tax to property owners that will not go directly to your community schools.

#3: SDUSD still has $2.1 billion in bonds left to sell that we are paying for, yet they are asking us to add $3.5 billion to that debt.

#4: In April and May of this year the school board approved 2% across the board pay raises for all employees and a 1% payout. This was in addition to the 5% raise in 2015.

#5: The ballot measure specifically states that “approval of this measure does not guarantee that the specific projects listed by the District will be funded by the sale of the bonds.”

#6: The expansion and renovation of Terminal 2 at the San Diego Airport in 2013 was $1 billion.

On Measure H, The Union Tribune Editorial Board provided the best reasons for to vote No on Measure H: San Diego school board term limits done wrong :

Which brings us to Measure H, placed on the ballot by the City Council at the behest of the San Diego Unified school board. It would limit new board members to three four-year terms beginning with the 2020 election. It would not apply to incumbents, meaning current school board members Richard Barrera, John Lee Evans and Kevin Beiser could end up serving a staggering 24 years each.

This is not what San Diegans want. In a district survey of 1,243 people, 54 percent backed a two-term limit, 23 percent sought a one-term limit and only 12 percent called for a three-term limit. District officials say their survey was not scientific. But that’s a self-serving claim by complacent officials who have resisted a more obvious improvement; district-only elections are what’s needed. Vote no on Measure H.

Tricky Dick did not only ignore the survey, he ignored all the recommendations of the Election Committee made up of a wide variety of SDUSD Stakeholders, appointed by the SDUSD Board of Education.

The District Deeds wants to ask ALL Stakeholders one simple question about YY an H:

Given their infamous history of budget mismanagement, full support of Marne Foster financial misbehavior, student sexual assault cover ups, lies about student achievement  and total lack of transparency and accountability, do you trust Tricky Dick Barrera and Pathetic Cindy Marten to completely change their ways and transparently/effectively manage $3.5 billion over the next 12 years?

To us, there is only ONE answer…

The District Deeds answer is No…and that means ABSOLUTELY NO on Measures YY and H!

Editor Note:  For a comprehensive voter guide that provides “in-depth information about whats on your ballot”,  District Deeds recommends the one provided by KPBS and Voters Edge: KPBS Voters Guide