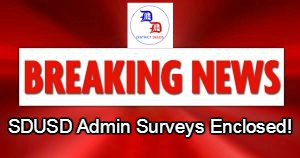 San Diego Unified School District (SDUSD) Principals, Vice-Principals and Central Office Managers were surveyed regarding their workload for the 2017/18 school year- 65% of them responded and the results are alarming.

On October 16, 2017, the day before SDUSD Supt. Cindy “Bersin in a Skirt” Marten gave her falsehood filled “State of the District Propaganda” speech, Ms. Doris Coronel AASD Executive Director, sent the following letter to Marten and her inner circle cronies: 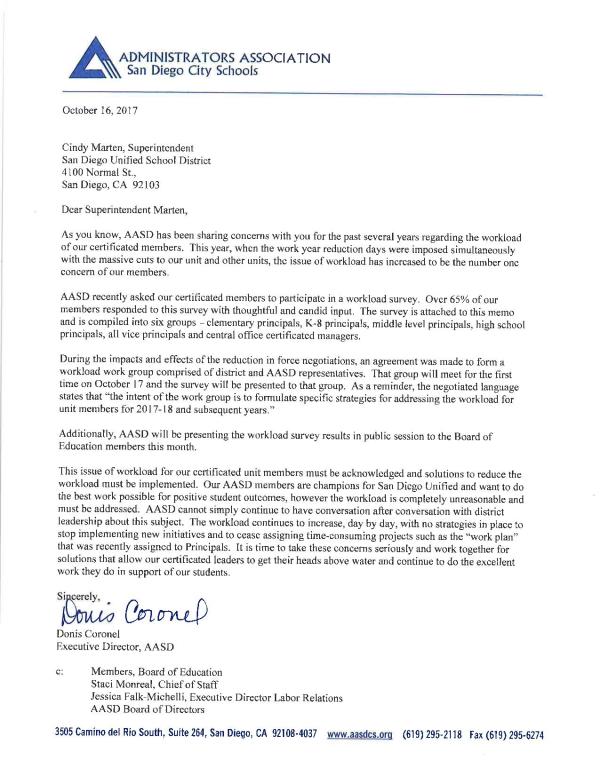 We encourage our readers to review ALL the survey responses.

These Administrators surveyed represent the “middle management” of the district. Over 200  Principals and Vice Principals manage all the activity at:

The surveys basically are a combination of “1-5” ratings, multiple chopice and narrative responses.

The following are some of the more troubling 1-5 ratings responses:

Here is a question asked of all Admin groups:

Please list the 5 most serious work challenges/problems you have incurred since July 1, 2017, (that have negatively impacted your workload)

The following is one of the comments from a high school principal to the question:

Lack of front office staff (Vacancies unfilled.)  Meetings that are not connected to the work that needs to be performed at the school. Related to above, inability to get maintenance/repair  work done.  Lack of timely (or any) training for new classified employees, which leaves principals to locate someone to pay to train new employees.  Promotion of inexperienced and underprepared employees into positions of leadership for which they are not prepared.  Being smart and skilled does not make up for lack of experience.  This practice affects everyone in the district causing a chain reaction;  lack of progress and oftentimes chaos in the programs/schools they are assigned, a need to “mentor” to help them get the experiences that they already should have; peers extend themselves trying to assist (when they don’t have the time), it sets a smart and competent employee up for failure simply due to lack of experience.

We have over 250 IEP students, many with very high acuity and only have a nurse on site for three of the five days of the week.  This has resulted in two 911 calls in the first two weeks of School and requires administration to manage crisis situations above and beyond our training.  —  We are missing eleven para support providers requiring a daily shuffling of substitutes and or unfilled positions.  This causes IEPs to be out of compliance  —  We have lost nearly 50 students due to transportation issues caused by the SERP and budget crisis.  As a school that relies on bussing for its student population, this has caused countless hours of struggle and stress trying to accommodate the needs of so many parents and students  —  As a specialty school, we do not operate in the traditional cookie cutter formula of other schools.  We require by our special status, special consideration with regard to staffing and key personnel in order to effectively run our site programs.  These positions have either never been funded or have been cut in funding so that we cannot do the job we were created to do.  —  The stress and strain of having to take on so many roles as an administrator and to overcome  so many support service being cut (both on site and at Central Office) make doing this job virtually impossible to do well and to give the students the support they deserve.

The night custodians  schedule being cut in half has cause a lot of work to not get done. I have had to spend a lot of my time trying to manage this and deal with unhappy staff. —  Much less support from IT, waiting for long periods of time periods of time on hold and then waiting several weeks for support to come out to the site  —  Work orders (painting, repairs, landscaping issues) take an extremely long time to get completed.  A painting work order I had put in last November was just completed this September. —  Loss of resource teacher because if budget cuts —  Very little support from HR and other district level offices

STAFFING: Brand new ESA and Clerk Sub in office- I have had to beg staff in other departments to help me input PARS, do Requisitions and support budget needs.  The staff does not have the skill set and the learning curve is extremely steep.   I am doing PARS, reqs. etc.

SAFETY:  Vacancies in critical Sped positions such as SEBT, Teacher.   I am spending all day, every day supporting student behavior needs that are physically aggressive and safety concerns.

BUDGET: Cannot get supplies purchased- no staff that know how to order items so I have had to buy all on P Card so it puts hours on my plate daily to get school open and ready.

LACK OF SUPPORT FROM CENTRAL OFFICE:  HR has ignored emails and phone calls, SPED staff have ignored emails and phone calls during crisis.  I have never experienced  it like this before.  I have had to beg other staff in district to help me.  —  Amount of work I have to do at night:  3-4 hours a night since all day I am supporting student behavior.

New Clerical hires- having to walk them through items and train them myself as they are not receiving adequate training is removing me from my job duties-Having positions frozen that provide safety and security of my students.  No noon duties equals me being out there for hours a day to maintain safety.  When am I supposed to catch up on work other than after hours. -Central office staff who do not know what they are doing – having so many people change positions, offices, and do not know the office they work for very well and therefore cannot provide the assistance that former employees that held that position could assist me previously,

IT – have been waiting for a remedy ticket from before school opened on a printer that is not connecting to any computers to be reconnected.  Still not remedied.  5 weeks. What is the point of even having the computer?  I have spent countless hours trying to remedy my own IT equipment because it will be weeks before they can come.  Kids now come to me to help them “fix” their computers.   I do it because I care for my kids and need them on their computers, but I really don’t have time for this when I’m supposed to be observing them and their teacher.  But what’s the point if their equipment doesn’t work.-

We are expected to provide information to the public from offices that have closed- example GATE- we were given a binder and a google link and were told now it’s our job to answer any and all GATE questions.

No ELST so it’s my job to run ELAC and meetings.

Again- when can I be expected to visit classrooms when I must fulfill those legal tasks and the best time for my parents is morning?         –

Having to complete budget exceptions for every little item after I have already submitted budgets which were already approved by my SSC, staff, parents, my area superintendent, the Finance and Planning office and the board of education, but still must submit exceptions forms for budgets I’ve already allocated so basically doing double work for no reason.

And finally, a statement by a Central Office Manager under “Additional Comments”

I take issue with the fact that the wholesale cuts/changes were made completely indiscriminately.  There was no analysis done by department, it was solely cuts across the board.  This is bad management.   Secondarily,   HR is a debacle.  They take so long to hire and rehire that by the time they are ready to hire someone that person has already taken a job in another district.  We then hire the people that other districts didn’t want (the leftovers), if we can find someone at all.  This is an issue that has plagued the district for years.

There are many more comments spread throughout the surveys that point directly to  the Supt. Marten regime leadership disaster.

Virtually ALL these school site  problems with support, especially in IT and HR, are directly related to the drastic staffing cuts by Marten.

When you compare the these honest comments from hardworking administrative employees with the lies that Marten told the sparse audience at the 2017 State of the District address this past Tuesday. Marten is anything but “authentic”.

Marten was especially inauthentic when she quoted Dr. Marten Luther King in her propaganda infused “State of the District” speech.

One of her statements in the speech Marten said:

Based on her obviously horrible performance as Superintendent we suggest a MORE “authentic” mantra that we are sure all the Administrators and SDUSD Stakeholders highly recommend to Marten:

At least it would be “Authentic”.