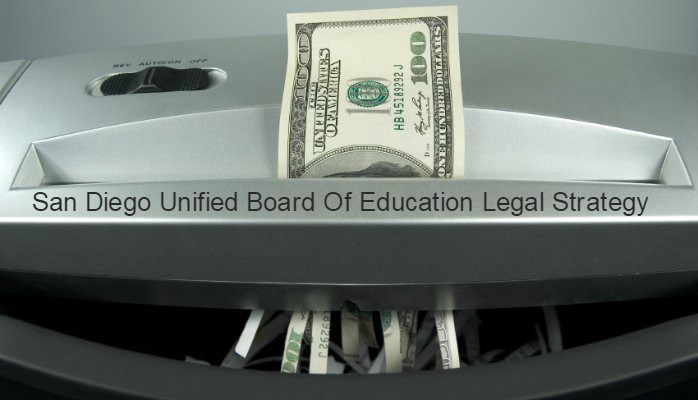 According to numerous local news reports, the San Diego Unified School District Board of Trustees voted yesterday to file a Temporary Restraining Order (TRO) against the College Board/ETS to have the invalidated Scripps Ranch High School (SRHS) test scores released instead of admitting their guilt and holding Central Office Personnel accountable for their lack of mandated support.

This is a drastic reversal of what was sent to  stakeholders just a week ago in a  SRHS Bulletin to Parents and Students that said:

After consulting with our legal department about possible recourse we explored previous case law which has demonstrated that other districts efforts to embargo such actions have failed in the courts.

District Deeds has received information from one of our  contributors that verifies that advice from the San Diego Unified School District (SDUSD) legal department is a solid suggestion based on past similar cases.

Back in August, 2013 (ironically beginning of the first school year with Cindy Marten as Superintendent), a very similar attempt to use a restraining order against the College Board/ETS by a California school district was attempted…and lost!

The ruling in that case was as follows:

The Court finds that Plaintiffs have failed to demonstrate a likelihood of success on the merits or that they will suffer irreparable harm in the absence of a TRO. Likewise, they have not shown that the balance of equities tips in their favor or that a TRO is in the public’s interest. Accordingly,

IT IS HEREBY ORDERED THAT:

1. Plaintiffs’ Ex Parte Motion for Temporary Restraining Order and Order to Show Cause re: Preliminary Injunction is DENIED.

IT IS SO ORDERED.

Obviously there are many, many other reasons why this TRO may be doomed to failure over and above the contractual requirement set-up violations by the SDUSD

And ESPECIALLY Violation of up to 3 internal SDUSD Policies or Procedures including AP Administrative Procedure 4845 that is signed by SDUSD Chief of Staff Stacy Monreal and General Counsel Andra Donovan and supposed to be implemented by Executive Director, Secondary Schools Cheryl Hibbeln:

There is NO proof that ANY SDUSD employees were notified by Secondary Schools “High School Resource Office” or the Central Office of seating layout changes initially or on an ongoing basis.

We truly understand the pain and suffering inflicted upon committed, passionate, SRHS families through the gross mismanagement and failure of the Marten administration to follow the detailed SDUSD policies and procedure rules to legally deploy the AP Testing process district wide.

We are extremely sorry that this gross mismanagement has injured these innocent families,

But it is NOT the Area Superintendent, Principal, AP Admin or Proctor that are at the root of this debacle.  They are almost as much of a victim as the AP Families.

And there is no reason for limited SDUSD funds to be pumped into a legal lost cause and be taken AWAY from other needy students and families.

It is clearly the neglect of SDUSD Central Office personnel that did not provide the SDUSD MANDATED support and oversight to campuses that are needed and required for this important AP educational initiative.

That is the job of Cindy Marten and her operational staff…and they did NOT do it.

Instead of reprimanding Marten or her Central Office cronies for their dereliction of duty, the SDUSD Board of Education has decided to throw good money after bad in the form of legal fees and filings for a legal lost cause in the middle of a budget crisis to cover up the total administrative incompetence of their hand-picked “elementary school” Superintendent Cindy Marten and to build the political brand of SDUSD Trustees Kevin Beiser, Richard Barerra, John Lee Evans, Mike McQuary and Sharon Whitehurst Payne.

Just another example of lack of accountability at the top.