Promises and Pitfalls of Online Education

Online courses have expanded rapidly and have the potential to extend further the educational opportunities of many students, particularly those least well-served by traditional educational institutions. However, in their current design, online courses are difficult, especially for the students who are least prepared. These students’ learning and persistence outcomes are worse when they take online courses than they would have been had these same students taken in-person courses. Continued improvement of online curricula and instruction can strengthen the quality of these courses and hence the educational opportunities for the most in-need populations.

The negative effects of online course taking are concentrated in the lowest performing students. As shown in Figure 2, for students with below median prior GPA, the online classes reduce grades by 0.5 points or more, while for students with prior GPA in the top three deciles we estimate the effect as much smaller and, in fact, we cannot tell whether there is negative effect at all for this higher-achieving group. Thus, while online courses may have the potential to differentiate coursework to meet the needs of students with weaker incoming skills, current online courses, in fact, do an even worse job of meeting the needs of these students than do traditional in-person courses. 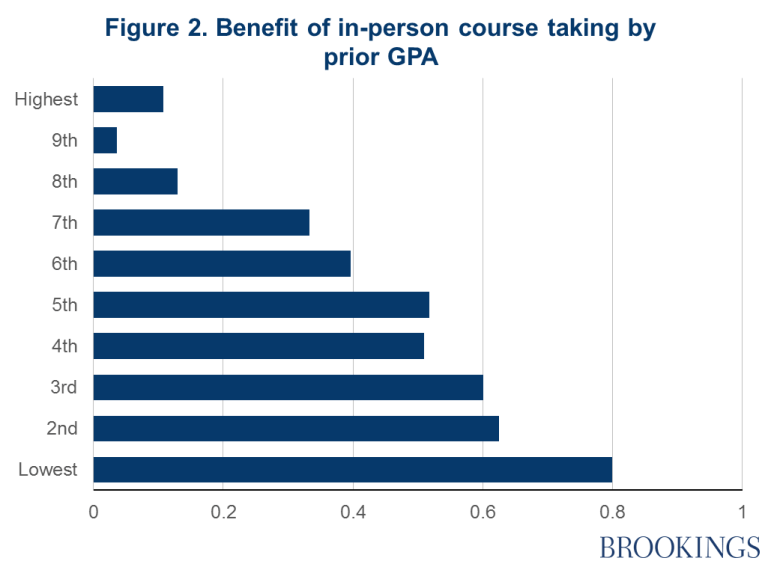 We have posted on District Deeds the negative impact of online classes without a proctor that have falsely inflated the SDUSD Graduation rates.

With this educational “double whammy” online course strategy imposed by the Supt. Cindy Marten administration to pump up graduation rates,  we can only guess how much worse it is for much more impressionable, struggling SDUSD high school students allowed to pass multiple online classes without a proctor for credit recovery.

Should Schools Test the ‘Career’ Half of ‘College and Career’

As states move to adopt college­ and career ­ready accountability systems under the Every Student Succeeds Act, many educators and researchers argue that assessments will not be able to adequately measure the “career” part of that equation.

“Over the years, we’ve built tests that measure better and better whether a student will be able to get at least a C in their first year of college—but they explain almost nothing about whether a student will succeed in an occupation,” said Anthony Carnevale, the director of Georgetown University’s Center on Education and the Workforce.

Career assessments typically focus on the occupations that provide high enough wages to support a family and require some post secondary training, though usually not a bachelor’s degree.  But Carnevale and other researchers have found that the material on career ­readiness tests, like the U.S. military’s Armed Services Vocational Aptitude Battery, or ASVAB, and the civilian WorkKeys run by ACT Inc., still overlap significantly with the academic content of college ­readiness tests like the ACT or SAT, which focus on early­ college content, rather than content geared toward the workplace.

This article points out a key gap in the current SDUSD Mission Statement:

“All San Diego students will graduate with the skills, motivation, curiosity and resilience to succeed in their choice of college and career in order to lead and participate in the society of tomorrow.

How does the SDUSD provide proof that students are actually ready to succeed in their choice of career?

Answer:  They provide no proof…it is just another empty slogan by the SDUSD propaganda mill.

The US Bureau of labor Statistics shows that “In October 2016, 69.7 percent of 2016 high school graduates were enrolled in colleges or universities”.  That leaves 30% going directly into the workplace.  The same report mentions that between 35% and 41% of graduates attending college are ALSO in the workplace.

A hint to how “unready” recent high school graduates are for college is evidenced by the many remedial math, english and science classes that SDUSD graduates are forced to take upon entering college.

A hint to how “unready” recent high school graduates are for careers is evidenced by the double-digit unemployment rate for 17-19 year olds.

In any case, don’t hold your breath waiting for the Marten regime to prove its empty mission statement slogan for College OR Career readiness.

Legislation requiring detailed disclosure of education spending down to the school site moved out of the state Assembly last week without dissent, setting up this summer’s showdown between advocates for low-income families and Gov. Jerry Brown over the use of billions in state aid.

AB 1321 by Assemblywoman Shirley Weber, D-San Diego, would require local educational agencies to collect and report expenditures of federal, state and local funds both by districts and individual schools. The bill also calls for spending to be broken out as either personnel or non-personnel expenses.

Supporters say the disclosure is necessary so that the public can fully understand where additional state funds provided under the Local Control Funding Formula are being used to support targeted subgroups–foster youth, English learners and low-income students.

While the bill passed out of the Assembly on a vote of 77-0, its progress forward is not certain.

Representatives of school administrators are expected to come out in stronger resistance because the new reporting requirements create a daunting bookkeeping chore.

This initiative headed by former SDUSD Board Trustee and current Assemblywoman Shirley Weber is critical to providing real transparency as to how the SDUSD spends LCFF money.

Any SDUSD Stakeholder or taxpayer who has read an LCFF related news article, attended an LCAP/LCFF planning or presentation meeting or watched a Board of Education meeting explaining the LCFF budget knows that every item is NEVER revealed, what is promised to Stakeholders in the LCAP gets lost in the complex accounting translation of the LCFF…and has no direct linkage or accountability to what actually is provided to students in the neediest groups and schools.

The current SDUSD version of the LCFF is impossible to decifer intentionally.

As the article predicted, you can bet that the SDUSD Supt. Cindy Marten and Board Trustees Richard Barrera, John Lee Evans, Kevin Beiser, Mike McQuary and Sharon Whitehurst Payne will plead poverty and the budget and oppose this important legislation.  The last thing they want is to be held responsible and accountable for their fiscal commitments and mismanagement..

District Deeds fully supports AB 1321 and we urge our readers to do so.

On the note of transparency and distrust of SDUSD leadership, we leave you with the quote of the week:

“A lack of transparency results in distrust and a deep sense of insecurity.”