Apparently the San Diego Unified School District (SDUSD) Board of Education and Superintendent bullies lost their nerve, like most bullies do, when faced with the consequences of insulting and challenging a stronger foe.

A resolution simultaneously insulting, inviting and lying to Secretary of Education Betsy DeVos has been withdrawn from tomorrow’s Board meeting agenda .

Historically, official Proclamations and Resolutions mean nothing to the current SDUSD Board of Education and Superintendent…but they DO have value in their multiple Con Jobs to distract and misinform SDUSD Stakeholders – Parents, Teachers, Students, Staff, Communities, Taxpayers and the Federal and State governments.

Barrera, Beiser, McQuary, Evans and Marten pulled the most outrageous Proclamation Con Job almost 1 ½ years ago with a Proclamation to honor disgraced former Trustee Marne Foster in the same meeting they were ordering an investigation into her corruption. 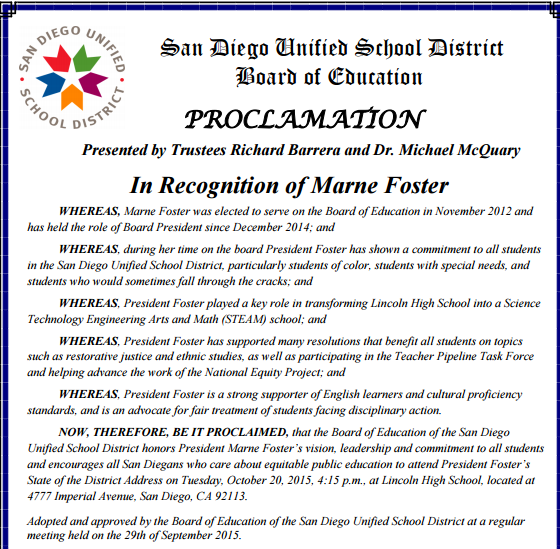 The newest SDUSD Resolution Con Job was even MORE ambitious…a Con Job on the new Secretary of Education Betsy DeVos…and apparently the Board and Marten were afraid to try and pull it off!

Here is the Resolution in item in item G1 on the agenda JUST WITHDRAWN for the Tuesday, February 14, 2017 Board of Education meeting tomorrow: 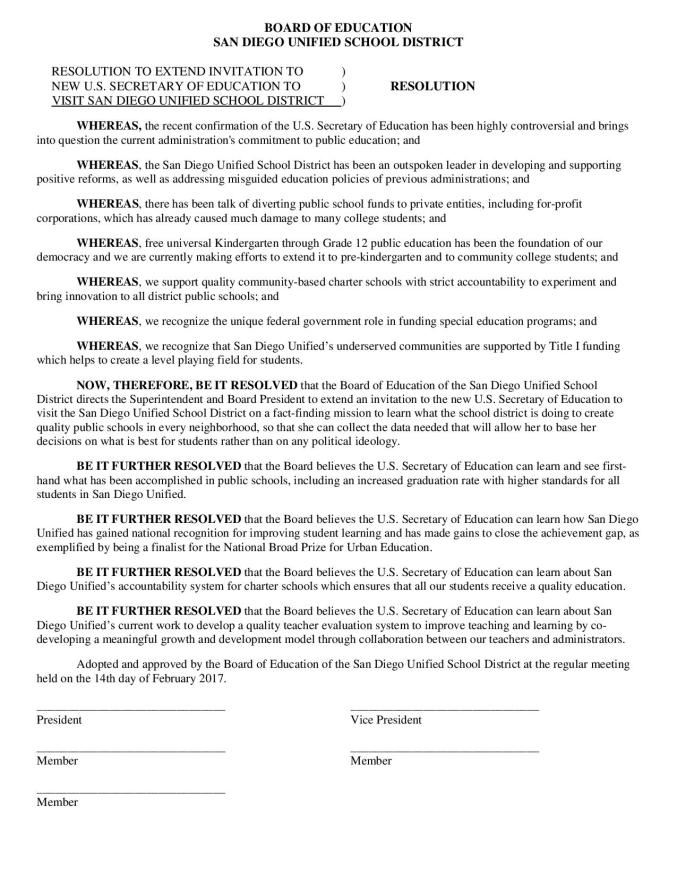 The G.1 Resolution is a typical jumble of insults and untruths by:

This “Resolution” document was obviously just another Barrera/Marten Con Job.

Sending out an INSULTING invitation to Ms. DeVos which NEVER EVEN MENTIONED HER NAME, the politically motivated SDUSD Board of Education led by Union Leadership tool and Board President Richard Barrera and his inept “partner” Cindy Marten, expected that DeVos would decline the invitation through the threat of Board and Superintendent manipulated protests by anti-Trump Administration backers…but then realized it would just enrage the DeVos and the Trump administration…and chickened out.

The purpose of this Resolution Con Job was that by INSULTING Secretary of Education DeVos, they REDUCED the risk of exposing the SDUSD Management dysfunction through an actual visit by DeVos while bowing to the SDEA leadership and INCREASING the impact value of their unethical public relations campaign featuring the phony support of immigrant students and their families.

And what better way to cover up the toxic SDUSD environment than to make it difficult to have Secretary DeVos actually witness the Marten Administration disaster in person!

Like most bullies, they lost their nerve at the last minute….they withdrew the Resolution on Sunday!

However they have not lost their taste for bullying the most vulnerable of SDUSD Stakeholders…ELL’s, Economically Disadvantaged Students/Families/Communities and the the less powerful non-SDEA District Employees.

The Board of Education and Superintendent Marten will need all the falsely acquired Positive Public relations support they can steal from selected local media flunkies when the neediest families and communities discover that the Board and Marten have CUT key English Language Learner (ELL) and economically disadvantaged Student supports due to their financial mismanagement that has resulted in a $124 MILLION dollar budget deficit!

District Deeds has a better way for Secretary of Education DeVos to “visit” the SDUSD Board and Marten using the same ruthless methods employed by the Board and Marten against Teachers, Administrators, Staff, and the families of sexually assaulted 5-year-old kindergartners …and AVOID protesters…here it is:

Have the Department of Education Auditors “visit” the books and interview (under oath) past and present employees of the San Diego Unified School District with a forensic audit:

With the forensic audit and any luck, Secretary DeVos will solve two problems:

We already know that Secretary DeVos and Superintendent Cindy Marten have a LOT in common…they are both BIG contributors to the growth of Charter Schools.

Marten contributed by being totally incompetent and unintentionally driving thousands of Students away from the SDUSD INTO Charter Schools in San Diego.

On second thought, maybe Promotion Hungry Marter should urge the Board to write a “Nice” Resolution and then send it to DeVos…with her resume!