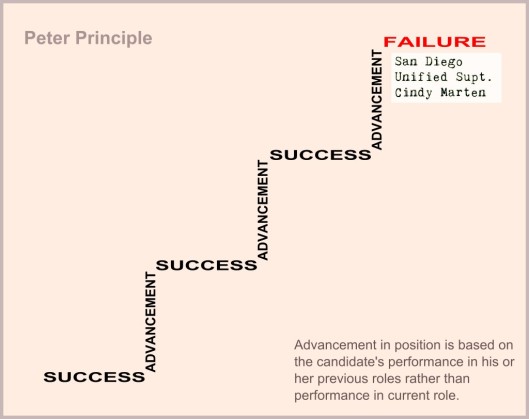 On that day, Scott Lewis of the Voice of San Diego wrote an article titled “The Great Questions of the Cindy Marten Era” where he posted the following statement:

I join the many who hope deeply for her success. The alternative isn’t something we can contemplate.

Believe it or not, with many reservations on the choice of Marten by the SDUSD Board of Education, District Deeds did not want to contemplate “the alternative” either.

Unfortunately it soon became obvious that Marten actually was the horrible, uncontemplatable “alternative”…an Elementary School Principal who, to quote the Peter Principal” had “risen to the level of her incompetence.” as the Superintendent of the 7th largest school district in the United States.

ALL the SDUSD Stakeholders were FORCED to contemplate it.

The first signs of the Marten hiring blunder was the rapid “Brain Drain” where many of the most talented and credentialed SDUSD Senior Administrators, Principals and Staff RAN away from being managed by an incompetent, inexperienced, poorly credentialed and egotistical “Elementary School” Superintendent.

After the obviously unethical activities by Marten and Foster at SCPA, District Deeds was launched and we soon outlined the horrible results of the Marten risk in a 6 part Series titled Anatomy of a Failed Superintendent

Claims we made at the time were called “allegations” and were dismissed as just wild complaints by a  “furious” and “angry” parent.

How times have changed.

There is a long list of blunders due to Marten’s inexperience.

There is also a long list of skilled, dedicated SDUSD employees that are no longer in the employ of the SDUSD due to the incompetence and fear of unfair persecution by Marten and her inner circle cronies.

Superintendent Marten has chosen cover up over sexual abuse prevention training and children have suffered…AND CONTINUE TO SUFFER…as a result.

Morale is at an all-time low within the SDUSD...employees are scared to death of retribution and have continued to adopt the “keep my head down and my mouth shut” motto.

We have reported it all.

In the last 20 months of our existence District Deeds has described Cindy Marten in many unflattering ways, but NOWHERE in all of our posts did we ever call Marten a criminal suspect.

We are not about to start calling her that now…but with the release of the communication between Foster and Marten regarding the fraudulent $250,000 claim we are convinced that there is solid proof of Marten knowledge of the violation.

NOW we find that despite OVERT attempts by Former Trustee Marne Foster to include Marten in a conspiracy to defraud the SDUSD of $250,000, MARTEN SAID NOTHING.

As Superintendent, it was Marten’s DUTY to expose the attempts by Foster to pressure her to approve the claim.

Unfortunately Marten said not one word of the improper coercion attempts by Foster:

Marten DID EVENTUALLY mention the coercion by Foster in her sworn testimony to the San Diego District Attorney during the Search Warrant investigation.

Apparently the only way for anyone to get Marten to tell the whole truth is to PUT HER UNDER OATH!

We wonder how much longer Marne Foster and her backers will allow Marten to accuse her without telling us what role MARTEN played during her improper actions.

Will Foster and her supporters allow the School Board and Marten to continue to play her for a SUCKER and a PATSY and a SCAPEGOAT to protect Cindy Marten from  scrutiny?

But Marten’s silence is not the only reason for termination.

To validate Fosters activity, Marten backed up and acted as the Career executioner for Foster’s improper retribution towards District Employees Kim Abagat, Mitzi Lizarraga and Esther Omogbehin…and likely many, many others that had less visibility.

Chief Operating Officer Marten, by her silence in reporting an attempted $250,000 felony against the SDUSD, has completely disqualified herself from any future employment in the San Diego Unified School District.

Cindy Marten MUST be fired IMMEDIATELY!

SDUSD Employees can use an alias to prevent retribution from Marten and her cronies.

3 thoughts on “The Case For the Termination of San Diego Unified Supt. Cindy Marten – PLEASE SIGN THE DISTRICT DEEDS PETITION”