It is clear that the total leadership incompetence, inexperience and corruption of Superintendent Marten, Trustee Tricky Dick Barrera and Trustee Sharon “Flying by the Seat of our Pants” Whitehurst Payne and the rest of their leadership cronies continues to damage the education of tens of thousands of SDUSD Students.

This Sunday Reads features an article from Education Week that proves how the Covid 19 Pandemic has proven that the best public education is not just a Public School only monolith as promoted by SDUSD Senior leadership and Teachers Unions and exposes the fact that PARENTS are the BIGGEST contributors and best decisionmakers when it comes to educating their children.

This relatively short article has a number of very interesting embedded links to key information and is posted in it’s entirely but we strongly urge our readers to click on the title and links and read the full article for themselves on Education Week.

And have a SAFE and Happy Holiday Season!!!

Covid-19 Has Capsized the Case Against School Choice

PDF: COVID-19 Has Capsized the Case Against School Choice (Opinion)

Schools across the land closed in March. It’s now October, most of the nation’s large school systems are still closed for in-person learning, and millions of students haven’t set foot in a school for eight months. Given this backdrop, it’s not so surprising that the case against school choice is coming apart. Last month, RealClear Opinion Research reported that, since April, support for school choice had risen by 10 points, from 67 percent to 77 percent, among parents with children in public schools. In August, EdChoice reported that 70 percent of parents said they want more than one educational option this fall. In September, a Manhattan Institute poll of voters in battleground states found that two-thirds supported “publicly funded K-12 school choice.”

What to make of this? Well, for one, we should treat all these numbers with due caution—they’re snapshots and can be affected by how questions are worded. For another, this undoubtedly reflects, at least in part, the prosaic fact that schools of choice have lapped traditional districts when it comes to communicating with parents and bringing students back to campus. The larger point, though, is that—whatever the vagaries of public opinion—the anti-choice stance is less compelling than it used to be. As I wrote last spring:

The most effective argument made by opponents of school choice has long been the simple assertion that we can’t trust choice to yield decent options for every child. And since every child has a right to be schooled, it’s important to protect traditional public school systems in order to assure an acceptable default education for every child. There are many responses to this line of argument—including that the default option may be a lousy one for many kids. But it’s true that school choice can’t guarantee that every child will wind up in a decent school.

Well, it’s safe to say that this line of argument is no longer operative. During the past six months, it’s become clear that what this universal, public system actually guarantees is a lot less than we imagined.

When push comes to shove, public school systems have defined “universal provision of schooling” as doing their best to provide online instruction, materials, and support to as many students as possible. In places like Los Angeles and Detroit, this has involved thousands of missing students—even as some districts quantify school attendance in pretty charitable ways.

Let’s stipulate that school systems are doing their best. Even so, in October, as throughout last spring, the leaders of most of the nation’s large school systems are still asking families to settle for lots of Zoom classrooms and online materials. This may be better than nothing, but it’s a long way from halcyon promises of universal public provision:

They’re asking overwhelmed parents to bear with them and home school as directed. Leaders are saying they’d like to reopen but can’t make any promises about when—and insisting that they may only be able to open if they get big new infusions of cash. OK. But it cuts both ways. If this represents a good-faith provision of a default public education, then the bar is a whole lot lower than choice critics usually suggest. States and communities could provide a bunch of online materials—along with a device for every child and better connectivity—for a small fraction of the $700 billion a year we currently spend on K-12 schooling. They could then use the bulk of that funding to empower parents to choose the option—local district school, charter school, private school, online provider, or what have you—that seems right for them.

This isn’t about the good intentions of district officials or teachers. And it isn’t about bombastic claims that public schools are “failing” or that public systems should be blown up. The issue, rather, is that universalist “public” systems aren’t delivering what was promised. This makes it harder for those who would denounce school choice’s tapestry of options as an inadequate or immoral alternative to make their case.

This relatively short article by Mr. Hess packs a wallop for all SDUSD Stakeholders.

For historical perspective, School Choice within the SDUSD, prior to the illegal appointment of inexperienced, incompetent Superintendent Cindy Marten almost seven years ago, was pretty robust.  Parents could choose a variety of SDUSD schools outside of their “local school” area and that choice was subsidized by an over $40 million busing program that allow economically disadvantaged families to get their kids to the best SDUSD school possible.

In the past seven years there has been an overt effort to FORCE parents to send their kids to their local SDUSD school no matter how horrible that SDUSD school was.  Busing has had a drastic reduction in both budget and routes.  Choice options for certain SDUSD schools has been drastically reduced.  But the anti-school choice effort by the incompetent Marten and her corrupt Board of Education cronies did not stop by reduction of busing and choice SDUSD school openings.

Now the desperate district who has been lying about SDUSD enrollment for months,  has embarked on trying to destroy HIGH PERFORMING Charter schools.

Case in point is the recent shenanigans’ in undermining the staffing at high performing Gompers Preparatory Academy in the District E community.

According to a 2 part series about Gompers on the IVN website by reporter Marsha Sutton, “‘Everything is in Jeopardy” at Gompers Charter because the SDUSD insists on breaking its commitment and removing 4 key leaders of the school in the midst of the Pandemic. 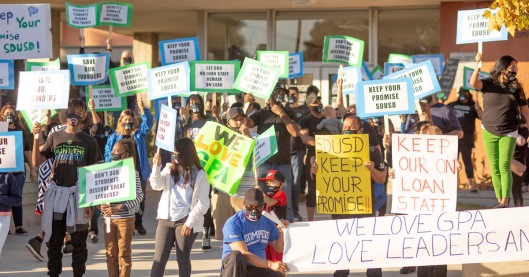 In Part 1 the article states:

Steppe, past president of the Urban League of San Diego County and a highly respected figure in the community, has been involved in the charter movement for Gompers since 2005 when the school board first approved the charter.

At that time, there were 10 district employees at Gompers. Today only four remain.

“Our original charter in 2005 and every charter renewal after that included language that stated that all on-loan employees could remain on-loan,” Parsons said.

She said they’ve had verbal threats to that right many times over the years.

In response to these threats, in 2010 then SDUSD Superintendent Bill Kowba made a commitment to Steppe, Parsons said, that the on-loan status for district staff who worked at Gompers would remain on-loan for the life of the charter.

Every five years the Gompers charter has been renewed with that guarantee included.  But at the last charter reauthorization in 2019, the district said they would not renew the charter with that language, Parsons said.

Gompers needed the renewal, so they agreed to the new terms, hoping the district would honor its original promise to keep on-loan conditions in place.

But three days later the district informed Gompers that the on-loan status was being withdrawn and the SD Unified employees working at Gompers would need to decide by March 2021 whether to stay at Gompers or return to the district.

“We felt that we were in a tough place,” Parsons said. “The renewal was necessary for us to keep doors open. We stood down and removed that language and really trusted … that they still cared enough about the success of the school and the original promise to keep renewing on an annual basis.”

Steppe said this is an underserved community that has benefited from the vision and leadership of Riveroll, whom he calls a master teacher.

“To pull this out from under them puts them in a difficult position because they love what they’re doing,” he said. “They’re very committed to the community.”

GPA is located in San Diego Unified’s District E, represented on the school board by trustee Sharon Whitehurst-Payne.

In an October San Diego Union-Tribune interview, when asked for her position on charter schools, she said they should be free to try different ideas to help students learn.

“We work hard to support these schools and encourage their innovation,” she said in the interview. “I am especially interested in some of our charter schools enjoying success in the education of young people of color.”

“I think she has consumed the Kool-Aid provided by the superintendent,” Steppe said. “There are bits and pieces of what she says that are supportive of what we’re doing, but I think she’s reluctant to go all the way with it.”

So now gutless Trustee “Flying by the Seat of our Pants” Whitehurst Payne is also proven to be drinking the Supt. Marten “Kool Aid”.

What a waste of a Trustee position on the SDUSD Board of Education!

What a blatant disrespect of the educational needs and desires of SDUSD Student and Parents!

“A decade of accomplishments…due to the tireless work of thousands of dedicated teachers and staff”?!?

And what about the hundreds of thousands of UNPAID Parent and Community Volunteers that tried to make the best of your educational leadership disaster?  We are not sure if it was an intentional omission or just a symptom of an empty head to go with your empty suit, but we are sure the vast majority of Parents and Community Volunteers are JOYFUL you left them off your ridiculous “credit” list.

District Deeds, with 18 years of SDUSD Volunteer service, certainly is glad you left us out!!!

The best part of the featured Sunday Reads article by Education Week is that it is true.

Communities, Families, Parents, Guardians and Students are discovering that that there are many other highly successful educational options and that Public Schools must step up their performance or be left behind by “a bunch of online materials—along with a device for every child and better connectivity—for a small fraction of the $700 billion a year we currently spend on K-12 schooling.”

Unfortunately the current incompetent SDUSD Superintendent and useless Board of Education do not understand that educational engagement and success is more than propaganda campaigns to build a false image of performance.

Unfortunately the current incompetent SDUSD Superintendent and useless Board of Education do not possess, or have shown the ability to acquire, any of these six key leadership components.

They only know how to to do one thing REALLY, REALLY well.

And those lies are leading Parents to other choices than the SDUSD.

Now our Quote of the Week dedicated to the SDUSD Senior Leadership:

“Any party which takes credit for the rain must not be surprised if its opponents blame it for the drought.” – Dwight Morrow