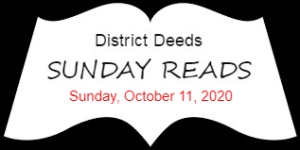 SDUSD Superintendent Cindy Marten and Trustee Whitehurst Payne are appalled by a generic letter from President Trump while victimizing Black and Hispanic Students and there has still been no progress on the botched SDUSD website “facelift” gone horribly wrong.  The total leadership incompetence, inexperience and corruption of Superintendent Marten, Trustee Tricky Dick Barrera and Trustee Whitehurst Payne continues.

This Sunday Reads highlights local article that focuses on a decision by hypocrite Marten and Payne to improperly censor federal government communication while ignoring racism and misappropriating funds from the most disadvantaged Black and Hispanic Students.

Provided below is an article from a local news organization with the most SDUSD relevant excerpts from that article highlighted.  We urge our readers to click on the title and read the full article for themselves.

San Diego Unified is removing letters from President Donald Trump that have been packed into free food boxes for families in need, saying the letter inaccurately downplays the necessity of masks in preventing coronavirus spread.

San Diego Unified, along with other school districts, food banks and other nonprofits, distribute boxes of fresh fruits and vegetables, dairy products, meat and other groceries to families for free through the federal Farmers to Families Food Boxes program, which started in May and has delivered more than 100 million boxes.

The U.S. Department of Agriculture has been placing a copy of a letter signed by Trump touting his response to the pandemic in every food box. In the letter, Trump said he has “prioritized sending nutritious food from our farmers to families in need.”

The food box letters have been criticized by Democrat lawmakers who believe Trump is using his position to promote himself in the weeks leading up to the election.

On Wednesday, San Diego Unified removed letters from 850 boxes, according to a district spokesman.

San Diego Unified said it takes issue with the part of the letter in Trump recommends that people “consider wearing a face covering when in public.”

“Science is clear: wearing a mask works to prevent the spread of the coronavirus,” Marten said in a statement. “Masks are required in California and on every San Diego Unified school campus. It is not optional, as the President wrote in his letter.”

San Diego Unified also said Trump misleads families in recommending that they protect “the most vulnerable individuals” from the coronavirus, including those 80 years and older and those with pre-existing conditions.

“Beyond understating the health benefits and ignoring the state mandate of wearing a mask, the Trump letter mistakenly repeats the president’s claims that only the very old and very sick need to be protected from the coronavirus,” the district said.

School Board Trustee Sharon Whitehurst-Payne also said the letter adds insult to injury because these food boxes are going to the district’s most disadvantaged students who live in communities that are disproportionately impacted by COVID-19. COVID-19 infection and hospitalization rates are significantly higher for Blacks and Hispanics than they are for Whites.

“To take advantage of that suffering by distributing misleading medical information is appalling,” Whitehurst-Payne said in a statement.

In an email, the U.S. Department of Agriculture said Trump’s letter includes health information critical to slowing the spread of COVID-19. It also countered claims that the letter is political.

“Politics has played zero role in the Farmers to Families food box program — it is purely about helping farmers and distributors get food to Americans in need during this unprecedented time,” the department said.

The department pointed to articles from Pro Publica and Politico that said the letters may not violate the federal law preventing electioneering by federal employees because the letters do not explicitly mention the election.

In a move that reminds us of infamous book burnings of the past, Marten decided to remove direct communication from the Federal Government to SDUSD families receiving food assistance.

Both Marten and Trustee Sharon Whitehurst Payne, who themselves have repeatedly taken “advantage of that suffering” and continuously betrayed the “district’s most disadvantaged students” themselves according to the NAACP and the Lincoln Cluster, have now hypocritically removed a letter from President Donald Trump for issues de-bunked by both Pro Publica and Politico.

Here is the letter from President Trump: 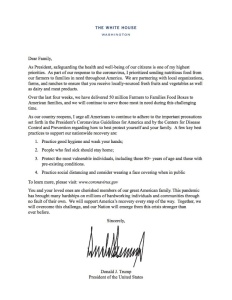 For purely partisan Democrat political reasons, Marten and Payne have decided that the families of the “district’s most disadvantaged students” must not read a non-partisan message from the President of the United States.

Let’s be real…does President Trump, like every other past incumbent President,  do everything legally possible to use his office to promote his reelection?

Does Marten and Payne like every other past incumbent Superintendent and Trustee,  do everything legally possible to use their office to promote their appointment or reelection?

The biggest problems with the improper removal of the communication from the current President is threefold.

According to the article above:

“the letters may not violate the federal law preventing electioneering by federal employees because the letters do not explicitly mention the election.”

In response to POLITICO’s questions, a spokesperson for USDA said Anthony Fauci, the top infectious disease official at the National Institutes of Health, supports the letters as a messaging tool.

“In addition to benefiting from fresh produce, dairy and meat products, Americans in need also are receiving essential information about how to protect themselves and others from COVID-19. These measures include avoiding crowds, maintaining physical distance (6 feet), covering your mouth and nose with a cloth face cover when around others, and washing your hands often,” Fauci said, in a statement provided by USDA.

The single-page letter included in the boxes, however, is less specific, telling people to wash their hands, protect the elderly and vulnerable, and stay home if they feel sick. The letter only says to “consider” wearing a face covering in public, though the Centers for Disease Control and Prevention explicitly recommends doing so.

Remember, these food boxes are distributed across the United States that have a wide variety of local and State regulations that are not uniform in their approach to Covid 19 prevention.

The issue to “consider wearing a face covering in public” is actually accurate in San Diego, California.

There is no enforcement to wear a mask in ALL AREAS. As evidenced in every San Diego sidewalk, street, beach, parking lot athletic field, millions of SDUSD Stakeholders “consider wearing a face covering in public” and, based on the situation, either decide to wear a mask or not.  Local rules in business and public office locations dictate the wearing of a mask and the citizen “considers” whether to enter those locations or not. Marten, Payne and the SDUSD Leadership are actually using the omission “burning” of the letter to further their own politically partisan position.

The real life question to the politically corrupt Marten and Payne is:

Would they have removed the same letter if it was sent from a Democrat like President Obama or Candidate Joe Biden?

Absolutely not…they would have come up with a solution, not a book burning.

3. Censoring non-political communication from the President of the United States to Students and their Families violates every tenet of free speech protected by the 1st Amendment, sets a precedent for restricting education based on the political party of School District leadership and grossly neglects the opportunity to educate Students through a real life situation.

As mentioned above, if the letter was from a Democrat and they disagreed with one word, they would have come up with a solution.

By removing a non-political letter from Republican President Trump, the Democrat Marten and her Democrat Trustee cronies have effectively POLITICIZED the Farm to Family Food Box themselves!

A simple solution would be to take the high road and and use it as a LEARNING OPPORTUNITY for all SDUSD Students, Families and Stakeholders.

How about a simple message (like the following) to all families from the Superintendent clarifying the SDUSD Covid 19 prevention rules:

San Diego Unified is proud to provide your family the enclosed Farm to Family food products from the Federal Government.

The enclosed message from President Trump is a generic letter for ALL states and communities.  In San Diego County and especially for the San Diego Unified School District, for your safety and the safety of all your family, friends and fellow citizens, the science is clear: wearing a mask works to prevent the spread of coronavirus in ALL situations. Masks along with social distancing and hand washing/hygiene, where there is a risk of infection is the absolutely BEST policy.  We will be enforcing this policy at all San Diego Unified facilities.

We hope you enjoy this Farm to Family Food Box!

The “district” also made the following claim:

“Beyond understating the health benefits and ignoring the state mandate of wearing a mask, the Trump letter mistakenly repeats the president’s claims that only the very old and very sick need to be protected from the coronavirus,” the district said.”

The District claim is not only misleading, it is a lie!

None of these weak partisan arguments is justification for a book burning response by Marten and Payne.

In fact it is the height of hypocrisy by Marten and Payne to claim that a simple generic letter from a Republican President is somehow “appalling” and a victimization of  the most disadvantaged Black and Hispanic students.

Marten and Payne know a lot about the appalling victimization of Black and Hispanic Students and Communities.

They both are active participants!

How should we describe Marten, Payne and their Trustee cronies regarding the claim by the NAACP San Diego Branch that Racial Issues are Alive and Well in San Diego Unified?

How should we describe Marten, Payne and their Trustee cronies about the claim by District E that both Marten and Payne conspired to misappropriate $400,000 of critical supports for Black and Hispanic Students at Lincoln High School and then lie about it?

Marten and Payne are very sensitive to generic messages in a food box from the U.S. President of an opposing party but not so concerned about the systemic racism and abuse they both promulgate through their corrupt lies and incompetent governance as leaders of the SDUSD.

Thank you Supt. Marten and Trustee Payne – your “book burning” exercise has enabled us to fully define you in two simple words.

Now our Quote of the Week:

“The only thing worse than a liar is a liar that’s also a hypocrite!” – Tennessee Williams