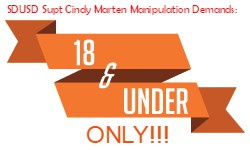 This morning, despite requests by the Students to have adult Parents, Guardians and Community Members allowed in the meeting, Supt. Marten vehemently refused and forced the “minor students only” meeting so she could attempt to use her power and influence to improperly manipulate the vulnerable students regarding the Principal selection at Lincoln High School.

Marten, hired without any credentials as the Superintendent of the 2nd largest school district in California,  has used the same intimidation tactic to sway vulnerable students without parental support in the past when trying to manipulate a Principal selection process.  We described her unsavory actions in SCPA Principal Selection Manipulation – Marten Monarchy Style.  At SCPA Marten pulled 2 students into her office to sway them away from demands that Principal Mitzi Lizarraga be retained.

District Deeds believes it is despicable for Marten to prevent adult parental support of their own under age students…something no other adult, including the police department, has the right to do.

This action by Marten proves she will obviously do anything to get her own way, no matter how unethical it might be.

No matter what the result is with the selection of a Principal at Lincoln High School, SDUSD Supt. Cindy Marten continues to set new lows on Stakeholder betrayal and devisiveness.

We will keep you up on the details as we receive them…stay tuned to District Deeds!