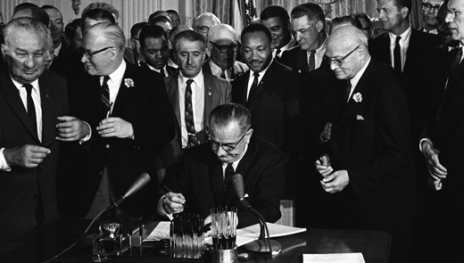 The Voting Rights Act, signed into law by President Lyndon Johnson (1908-73) on August 6, 1965, aimed to overcome legal barriers at the state and local levels that prevented African-Americans from exercising their right to vote under the 15th Amendment (1870) to the Constitution of the United States. The act significantly widened the franchise and is considered among the most far-reaching pieces of civil rights legislation in U.S. history.  History.com

SDUSD Board Trustees Richard Barrera, John Lee Evans, Kevin Beiser and Michael McQuary with the assistance of Superintendent Cindy Marten through investigation delay, coverup and misrepresentations of the fraudulent actions by Marne Foster have SUCCEEDED in completely removing the voting rights of all SDUSD Stakeholders in District E.

Instead of funding an election to let ALL District E Stakeholders vote, the SCAM of having the Board “appoint” another one of their cronies is the plan.

On top of it all, THE APPOINTED CANDIDATE CAN RUN IN THE PRIMARY AND NOVEMBER ELECTION!!!

In other words, the HANDPICKED CANDIDATE BY THE BOARD GETS THOUSANDS OF DOLLARS OF FREE ADVERTISING AS A BOOST TO GET ELECTED!!!

Here is the APPROVED plan (scam) by the same Board and Superintendent that refused to reveal Fosters violations:

Timeline for Governing Board Appointment

In 2012, to elect former Trustee Marne Foster, THOUSANDS of dollars were spent over the FULL YEAR preceding the election to fully inform the 194,954 REGISTERED VOTERS who participated in the election.

By comparison, the “Special” Board Meeting will last 3 hours and be held in a room that holds under 500 individuals.

Appointed Candidate gets thousand of  dollars of “name recognition” free advertising vs. Opponent gets $0

*who may or may not even be members of District E