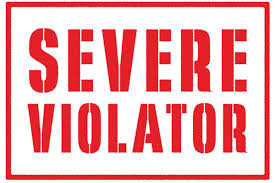 Given this OBVIOUS VIOLATION by Superintendent Marten and the BOE along with all the violations described below in this post, VIRTUALLY EVERY STAKEHOLDER at every one of the 176 SCHOOLS IN THE SDUSD has grounds to FILE A UNIFORM COMPLAINT against the SDUSD and also request to a SAN DIEGO COUNTY GRAND JURY INVESTIGATION!

NOW IT IS TIME FOR THE REST OF THE SDUSD STAKEHOLDERS TO HOLD THE INCOMPETENT SUPERINTENDENT AND BOARD OF EDUCATION ACCOUNTABLE!

Here is the SDUSD BOE violation by not allowing Public Comment BEFORE a vote during a Public Hearing which NEGATES the approval vote:

Since the inept BOE President Meddlin ‘Marne Foster did not correct the “mistake” and “reset” the FULL hearing including discussion and another vote, the BOE BROKE THE RULES OF Title 1 Hearings… (A VIOLATION).

There are potentially HUNDREDS of irrevocable individual actions and violations that the SDUSD Superintendent and BOE took in June, 2014 and June 2015.

The multiple violations…violations in the majority (if not all) of the 176 San Diego Unified School Sites covered by the SPSA…are solid grounds for UNIFORM COMPLAINTS by ALL SDUSD Stakeholders along with ANOTHER DAMNING SAN DIEGO COUNTY GRAND JURY INVESTIGATION!

The following is the FULL STORY…with NO spin from the SDUSD Propaganda Department:

The WELL ESTABLISHED SPSA and budget Process IN JUNE 2014 WAS fairly straightforward….here are the SIMPLE ESTABLISHED STEPS:

Here is the timeline on how the Superintendent and Board Actions neglecting to pass the 2014 SPSA fiasco actually went:

At that time, with the help of District Advisory Council for Compensatory Education (DAC) Past President David Page, one of the MANY WAYS that the SDUSD VIOLATED STATE AND FEDERAL LAW is illustrated below:

For receiving State and Federal Funds WITHOUT an accompanying BOE APPROVED SPSA FROM EVERY SCHOOL FOR THE 2014/15 SCHOOL YEAR BEFORE THE SCHOOL YEAR BEGINS here is the law:

There was NO SDUSD Board of Education Approval of 2014/2015 SPSA’s for schools receiving Title 1 funds in June, 2014 for the Federal and State funds ACCEPTED AND SPENT FOR THE 2014/15 SCHOOL YEAR! (A VIOLATION)

District Deeds will be following up ON THIS BLOG with ways SDUSD Stakeholders can file UNIFORM COMPLAINTS against the SDUSD for these and other violations and also participate in a SAN DIEGO COUNTY GRAND JURY INVESTIGATION regarding the SDUSD Superintendent Marten and BOE “BROWN VS. BOARD OF EDUCATION” violations.

SEND US AN EMAIL TO DISTRICTDEEDS@GMAIL.COM AND WE WILL PROVIDE YOU ALL THE INFORMATION YOU NEED TO FILE YOUR COMPLAINT!!!

IT IS TIME TO STAND UP FOR OUR STUDENTS…AND FOR OURSELVES…SEND US AN EMAIL TODAY TO GET STARTED!

2 thoughts on “San Diego Unified Board of Education INADMISSABLE APPROVAL of 2014-16 SPSA’S: Do YOU Have A UNIFORM COMPLAINT TO FILE?”