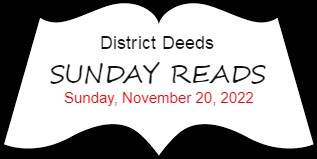 Over the next few months San Diego Unified School District (SDUSD) School Site Committees (SSC) should be analyzing how the approved school site 2022/2023 “Single Plan for Student Achievement (SPSA) is being deployed and also will be developing plans for the 2023/2024 SPSA.  Those new SPSA’s from each school will be integrated into the 2023/2024 SDUSD Local Control and Accountability Plan (LCAP).

Today in Sunday Reads we are reviewing the LCAP and Stakeholder Uniform Complaints.  We discovered that the LCAP and Uniform Complaint process are the primary documents/initiatives that expose the deep seated corruption and dysfunction of the San Diego Unified School District (SDUSD) and California Department of Education (CDE).

To paraphrase regarding the CDE/SDUSD LCAP:

Never in the field of Public Education has so much been promised to so many but delivered to so few.

To prove this we have chosen an article that gives us an idea of how a school district community has tried to fight for the rights of the neediest Students in using Uniform Complaints.

The article is from Antelope Valley Press describing a California Department of Education (CDE) appeal denial against the Antelope Valley Union High School District Stakeholders “for claiming that the District “misappropriated millions of dollars set aside for foster youth, English learners and low-income youth. In addition, the complaint said the District allocated $1.7 million in funds intended for low-income students, English learners and foster youth to pay for a contract with the Los Angeles County Sheriff’s Department.”.

State rejects appeal on use of funding

PALMDALE — The California Department of Education denied an appeal by Neighborhood Legal Services of Los Angeles County and Equal Justice Society of an Antelope Valley Union High School District investigation report in regard to a uniform complaint the groups filed alleging the District’s 2019-20 Local Control and Accountability Plan was out of compliance with state law.

The complaint alleged that the District misappropriated millions of dollars set aside for foster youth, English learners and low-income youth. In addition, the complaint said the District allocated $1.7 million in funds intended for low-income students, English learners and foster youth to pay for a contract with the Los Angeles County Sheriff’s Department.

On Sept. 14, the District received word from the Department of Education that all five allegations in the original appeal were denied, Superintendent Greg Nehen announced at the Oct. 19 Board meeting.

The uniform complaint alleged that the District’s estimated actual expenditures on several of its contributing actions reflected that the District both underspent and overspent Local Control Funding Formula supplemental and concentration grant funds budgeted for low income, foster youth and English learners, according to a copy of the CDE’s 15-page decision.

In response to the first allegation, the District indicated that it spent less than it budgeted for supplemental and concentration funded actions and services in the 2019–20 school year “due to the COVID-19 school closures and by the receipt of COVID-19 relief funds, which were utilized to fund a variety of planned actions,” the CDE report said.

In addition, the District prioritized spending COVID-19 relief funds due to time constraints, where it would lose the money if it was not spent by the deadline. The unused supplemental and concentration grant funds were carried over to a special reserve fund and remain available for the District to use in the event of a future shortfall, the report said.

Neighborhood Legal Services and Equal Justice Society, in its appeal, urged the CDE to “order the District to reallocate any underspent and misappropriated S&C funds towards services for unduplicated pupils.”

AB 1835 was introduced in response to a November 2019 report issued by the California State Auditor, which concluded that the there is “no requirement under current law for districts to continue using unspent supplemental and concentration funds in the following year to increase or improve services for intended student groups — the unspent funds essentially can be used for any purpose in subsequent years,” the CDE report said.

Newsom, in his veto message, expressed support for the bill’s intent but also expressed concerns about flaws and implementations, the CDE report said. He noted the administration would propose different statutory language for the Legislature to consider in the 2020-21 budget. That language was proposed and became Assembly Bill 130, which became law, in July 2021. It led to new requirements and a new LCAP template starting with the 2022–23 school year, the CDE report said.

“(T)he CDE finds that the District’s ultimate disposition with respect to this allegation — that there was no violation of law with respect to ‘carryover’ from the 2019–20 school year into the 2021–22 LCAP and school year — is not contrary to law,” the report said. “Accordingly, the Appeal as to Allegation 1 is not sustained.”

Neighborhood Legal Services and Equal Justice Society’s second allegation said that the District must adopt an LCAP using the State Board of Education-adopted template. The CDE found that the District’s conclusion that the LCAP’s goal descriptions did not violate state law or the template as “supported by substantial evidence and consistent with the law.”

The third allegation challenged the sufficiency of District’s demonstrations regarding contributing districtwide actions from the 2019-20 LCAP. However, because the allegation was not filed within the one-year filing deadline, the CDE did not address the alleged insufficiencies.

The CDE report also did not address the allegation regarding the District’s contract with the Los Angeles County Sheriff’s Department as a contributing action in the 2019-20 LCAP because it was not made within th one-year filing deadline.

The CDE determined the fifth allegation — that the District’s LCAP “lacks transparency” regarding the use of S&C funds and “deprives the public of the right to meaningfully participate in the LCAP process” — derivative of the other allegations, which were addressed by the decision.

The most interesting portion of this article as how easy the CDE was able to avoid addressing key parts of the complaint about the 22,000 student Antelope Valley Union High School District (AVUHSD) violations.

The first “allegation” was dimissed because the CDE deployed a Covid funding strategy with huge loopholes that allowed school districts like AVUHSD (and the SDUSD) to spend Covid money any way they saw fit in any time frame they desired at the expense of the neediest Students.  An attempt by the State Auditor in AB 1835 to close those loopholes was vetoed by Gov. Newsom and later passed as “Assembly Bill 130″.  The CDE did not reopen or reassess the case because of the change in law.

The huge loophole for ZERO accuracy and accountability was also used to dismiss the second “allegation” when the CDE apparently ignored the requirements of using its own LCAP template.

The third and fourth “allegations” were not even addressed due to missing the 1 year statute of limitations rule.

The fifth allegation was dismissed by the CDE by claiming they already addressed that issue through the loopholes explanation in Allegations 1 and 2.

Where is the “intent” of the law in the decisions of the CDE?

After the denial of your UC appeal, how can the only justice to be found is if you are willing and financially able to go to court for a “civil remedy” against a multimillion dollar District or State Legal team?

Obviously nowhere to be found in the CDE.

And, after our investigation, obviously not in the SDUSD.

In the SDUSD we have experienced the very same corrruption first hand.

The standard disgusting SDUSD propaganda strategy of monetizing the images of young students (especially black and brown) should have tipped us off. 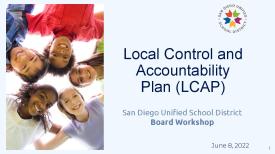 We did a word search for “uniform complaint procedure” in that propaganda document and SURPRISE!!!!!

EDITOR NOTE:  We are intentionally not providing the link to the SDUSD 2022 LCAP document as we see no benefit to spreading SDUSD propaganda.

So we verified the “1 year” statute of limitation from the California Education Code regarding LCAP Uniform Complaints and found it (highlighted in red):

It says “one year” from “the date when the reviewing authority (school board) approves the LCAP”.

So then we went to the SDUSD webpage regarding Uniform Complaints:

And futher down the page…

“A complainant may pursue available civil law remedies outside of the District’s complaint procedures.”

In other words, to get justice from the SDUSD you must fight them and their multimillion dollar legal team in civil court.

In that situation, our “WHY”, (to imitate the LCAP Document above) is WHY the SDUSD would admit to ANY violations with that bulletproof legal protection?

Here is the link to the UC page on the SDUSD website captured on the Wayback machine archive:

Here is the page today directly from the SDUSD website that may change after the corrupt “Community Affairs/Legal Department” finds out:

LCAP description: Description and UC statute of limitations… Nowhere to be found!

Integrity nowhere to be found

Now for our “quote of the week” dedicated to our corrupt SDUSD Superintendent and Board of Education…no matter how much money they make off the backs of the neediest families:

Mudita is based on the recognition of our interdependence, or Ubuntu. The Archbishop explains that in African villages, one would ask in greeting, “How are we?” This understanding sees that someone else’s achievements or happiness is in a very real way our own. –  Dalai Lama XIV