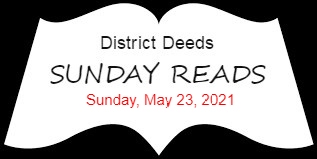 In this week’s Sunday Reads we address “Leadership” in its many forms in the San Diego Unified School District (SDUSD) community.

First, as a special feature in this week’s Sunday Reads, we are providing an open letter to the  community providing the guidance and leadership of Ms. Francine Maxwell, President of the NAACP San Diego Branch.

We thank Ms. Maxwell for her leadership and service to the SDUSD community and support each and every point she has made in her letter.

Secondly we explore another version of public leadership through an open letter sent by Fourth Council District leader, Councilmember Monica Montgomery Steppe, to the SDUSD Board of Education asking them to answer 12 questions regarding outstanding issues at Lincoln High School.  District Deeds posted her letter this past week.

The two letters from community leaders made this an extremely bad week for the San Diego Unified School District (SDUSD) Board of Education, especially for corrupt Trustees Richard “Tricky Dick” Barrera and Sharon “Flying by the seat of our pants” Whitehurst Payne.

Our third and fourth exploration of leadership comes from the responses of both untrustworthy Trustee “leaders” (Barrera and Payne) to the press about the phantom “achievements” at Lincoln High School and then how the San Diego Union Tribune decided to cover it.

To quote Margo Channing:  “Fasten your seat belts, it’s going to be a bumpy night.” 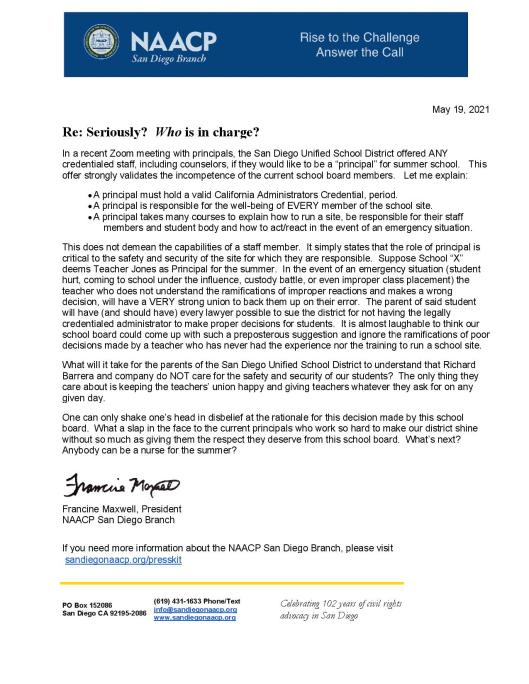 Ms. Maxwell strikes at the heart of the SDUSD dysfunction that has been plaguing the district since at least 2013.

According to numerous studies across the nation, the Covid 19 pandemic has taken a huge toll on the education of millions of United States students.  With vaccinations becoming widely available for all citizens as young as 12 years old, this summer represents the first best chance for ALL Students to begin the long journey back to grade level performance.

As stewards of our children’s education, we expect our school system to take this critical opportunity to maximize the positive impact of summer school with only the most qualified and skilled SDUSD personnel for this effort.

Instead, as Ms. Maxwell pointed out, the SDUSD Board of Education proposal to appoint non-principal, credentialed employees as Principals for summer school is “almost laughable” if it wasn’t so destructive and sad for all students.  In our opinion. it is almost equal to a corrupt Board of Education illegally appointing an unqualified Elementary School Principal as Superintendent

By boldly speaking out, Ms. Maxwell, who opposed the Marten nomination for Deputy Secretary from the beginning, embodies the honest, forthright leadership skills from a non-profit organization dedicated to equity and to help guide our communities during this difficult time.

Ms. Maxwell represents the best of non-political advocacy, fully dedicated to the needs of students.

Later that day, after Ms. Maxwell provided the open letter on May 19, 2021, elected San Diego Fourth Council District Councilmember Monica Montgomery Steppe sent a letter to the SDUSD Board of Education asking them to answer 12 question regarding outstanding issues at Lincoln High School.  District Deeds posted her letter this past week.

We thanked Ms. Montgomery-Steppe, who was elected in 2018,  for her bravery and effort in asking those questions that have been asked by the community for at least the last 7 years.  It always helps when a political figure (Ms. Montgomery Steppe) from the dominant political party (Democrat) asks a member of their own political party (Richard Barrera) to be accountable for improper oversight and leadership.

The only question from the community is why Ms. Montgomery Steppe waited until AFTER the Marten nomination was approved (and supported by Democrat Politicians from Mayor Todd Gloria to California Secretary of State Shirley Weber) to NOW, after 3 years in office, to support an inquiry into the dysfunction at Lincoln High School caused by Marten and Barrera mismanagement.

Political expediency or just poor timing…you be the judge.

Of course the the least newsworthy portion of this review of SDUSD leadership (or lack thereof) is the response of the actual SDUSD Leadership to dysfunction in the SDUSD generally, and specifically at Lincoln High School.

Instead of providing huge amount of actual proof from the #NoMarten initiative supporting the questions and claims by Ms. Montgomery Steppe, the Union Tribune “reporter” decided to regurgitate the same cherry picked data points by Barrera, Payne and the SDUSD Propaganda minister supporting the fantasy of a wonderful Lincoln High school Campus that has actually lost over 50 percent of their students in the past 8 years.

A perfect example of what School District leadership and independent media reporting should NOT be, this article by the UT proves the gradual erosion through pressure of independent journalism in the face of a $1.3 billion SDUSD monolith.

The BIG question for our readers is:

What type of local leadership will you rely on for the truth?

Will you rely on leadership from the head of a non-profit organization dedicated to equity that is willing to speak out against bad behavior by members of the political party their organization supports despite any and all possible repercussions?

Will you rely on leadership from a politician who is brave enough to speak out and question the horrible management of the lowest rung of their political party (School Board) but decide to wait until AFTER the primary person responsible for the dysfunction has been has been promoted in order to avoid senior Democratic party blowback?

Will you rely on leadership of Board of Education members who have lied about school district performance for at least 8 years and, despite overwhelming proof to the contrary, are able to continue their lies unbridled by most of the local press and ALL of the super majority Democrat California Department of Education cronies?

Or will you rely on leadership and the truth from local media outlets who require access to SDUSD officials to keep their job and who, for employment self preservation reasons feel they must present “fair and balanced” reporting despite the fact that outright lies by the SDUSD do not qualify as fair or balanced?

What leadership model do YOU choose to trust?

Now for our quote of the week, dedicated to democracy and all San Diego journalists and politicians: