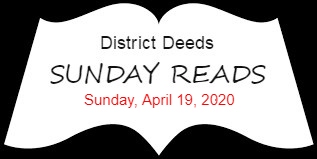 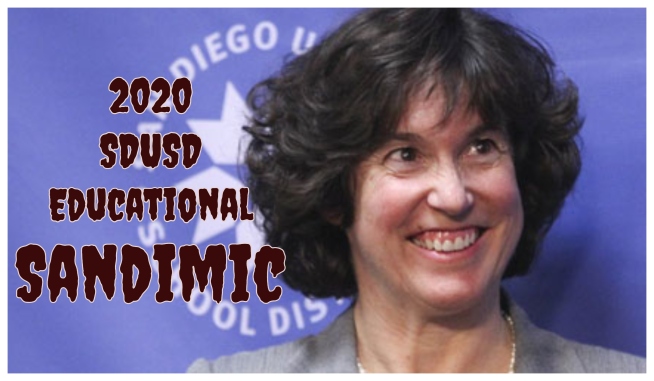 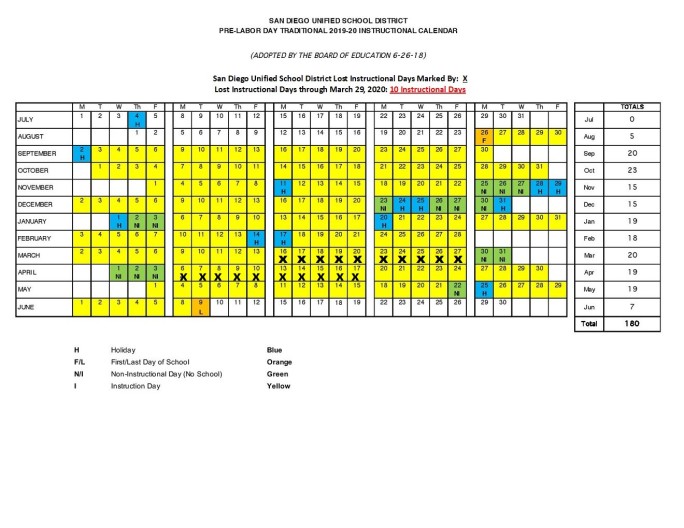 After three weeks of ONLY District Deeds publicly shaming Elementary School Superintendent (ESS) Cindy Marten (aka: CINDY-20) and Trustee Richard “Tricky Dick” Barrera for neglecting to have any semblance of a Disaster Recovery or Educational Continuity Plan, the San Diego Unified School District (SDUSD) has FINALLY initiated a sketchy plan to initiate distance learning.  The result of this gross SDUSD operational mismanagement by ESS Cindy Marten, her crony senior staff or the “Empty Suit” Board of Education after closing SDUSD Schools on March 16, 2020 is 20 lost instructional days…and counting for the ongoing education of 103,000 Students and strong leadership for the over 13,500 employees!

This gross incompetence has led to the 2020 SDUSD EDUCATIONAL SANDEMIC.

Given the ineffective, inconsistent and erratic educational leadership Sandemic created by CINDY-20 during the COVID-19 Coronavirus shutdown, District Deeds will try and fill a small part of the huge educational gap with articles, news and a special Page dedicated to tools, strategies and  materials for families and employees who are bearing the brunt of CINDY-20 inexperience and incompetence.

The link to the new page (Also listed on the top of the District Deeds blog) is:

As an ongoing feature especially for the Coronavirus Pandemic, we will begin to show the progress, or total lack thereof, of the SDUSD leadership via relevant LOCAL news articles by LOCAL Reporters (if available) that focus on the SDUSD Sandimic.

SAN DIEGO (AP) — During the first week that her San Diego public school was shuttered to slow the spread of the coronavirus, not one of Elise Samaniego’s students logged on to her virtual classroom.

Three weeks in, the teacher still hadn’t connected online with roughly two-thirds of the students in her third- and fourth-grade combo class at Paradise Hills Elementary. She fears the pandemic will exact a devastating toll on education in the United States, especially at low-income schools like hers.

“I do have several students below grade level, and this is just going to make it worse,” said Samaniego, who has been emailing and calling families to get her 22 students to participate.

Teachers across the country report their attempts at distance learning are failing to reach large numbers of students. Hundreds of thousands of students are still without computers or internet access. Those who do log on have countless distractions: They are babysitting siblings, sharing laptops, lying in bed during lessons. Others log on only to walk away.

“The pandemic is an educational equity crisis for vulnerable students who were too often underserved by our education system in ‘normal’ times,” said Ian Rosenblum, executive director of The Education Trust-New York.

Not all schools are struggling. Those accustomed to technology transitioned smoothly. Derek Blunt, a math teacher at Making Community Connections Charter School in Keene, New Hampshire, said students are issued iPads in normal times and regularly use Google Classroom and other platforms. A week after the school closed, nearly all of his 65 students were doing their work.

In contrast, students at Samaniego’s school faced several hurdles before learning could begin. Some only had internet access through their parents’ phones.

“I can’t tell them even where to start,” she said. “Do you have a computer? That’s step 1. Then you have to download Chrome. That’s step 2.”

In New York City, the nation’s largest school district, tens of thousands of tablets and laptops have been lent to students, and the plan is for everyone to have a device by the end of April. Mayor Bill de Blasio said the district was still gathering data, but “there’s clearly an issue with attendance.”

That is true in many places.

In the Los Angeles Unified School District, the country’s second largest, as many as 40% of elementary school students had not logged on even once as of the first week of April — three weeks after the system closed.

As for those who have made an appearance, superintendent Austin Beutner, cautioned that “merely logging in does not tell us anything more than the student turned on their computer.”

In ordinary times, some 16% percent of public school students nationally are chronically absent, with higher rates among high school, black and Hispanic students, according to the U.S. Education Department.

Many districts are now not tracking attendance because it tells them so little. But attendance is usually critical: Absenteeism is linked to a significant increase in the risk of dropping out of school.

And attendance is only one part of the puzzle.

Schools are responding by making accommodations. San Diego Unified School District said this month is for working out the kinks, and instruction officially starts April 27. Some schools are adopting pass or fail systems or “no harm grading,” in which grades will not be lowered during distance learning but can go up.

Given the difficulties of conceiving lessons and science labs that are effective virtually, some assignments feel like busy work to Emily Weinberg, a senior at Lexington High School, a public school in Massachusetts.

“I had to try to figure out what the kinetic energy of a dime was when I pushed it,” she said. “I felt like this is wasting my time.”

Even so, she’s completing all her work.

But others aren’t and, in light of the challenges, some districts are ending the school year early, rather than leave many students behind. Many states are waiving the day requirements they set for this year.

Officials have not said what will happen in the fall, though there have been some calls to have certain kids who already were struggling repeat the year.

Dan Gannon, who teaches history at Bronx Leadership Academy, a public school in the nation’s poorest congressional district, agrees lessons have suffered in shortened periods without teacher aides. Participation in his classes has vacillated between 50% and 80%.

Still, some learning is better than none, he said. Expectations need to be adjusted, but “that shouldn’t stop us from trying to do some kind of teaching and some kind of learning.”

This disruption is the second since 2018 for Achieve Charter School, which burned down in California’s deadliest wildfire that devastated the town of Paradise.

Immediately after the fire, principal Steven Wright held morning assemblies via Facebook. He started them again after his school closed in March.

“What are we really hoping to teach kids?” Wright asked during one recent online assembly. “I don’t think that those things that we talked about — in life, and entrepreneurship and how to be a better person and lead our world and be world changers — I don’t think that teaching those things is limited at all by not gathering together for awhile.” 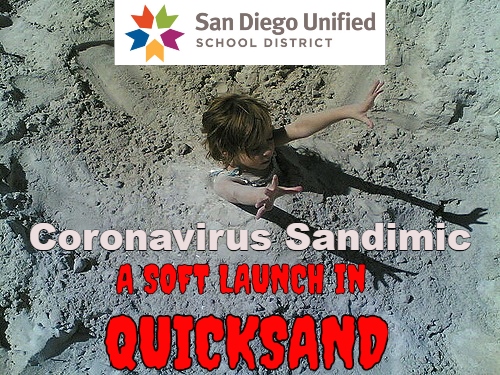 Week 1 of the of the SDUSD Sandimic “Soft Launch in Quicksand” has produced very little LOCAL reporting on the lack of progress by the SDUSD in PREPARING to educate to educate the 103,000 Students.

Only this article by the AP provided a honest quote from one brave SDUSD Teacher in trying to roll out distance learning for her students with a total lack of operational leadership by ESS Marten and Tricky Dick Barrera:

“I can’t tell them even where to start” – SDUSD Teacher

Multiply that perception by 6,000 SDUSD Teachers, 103,000 Students and over a million taxpayer Stakeholders and you will begin to see the absolute educational disaster – the SDUSD Sandimic.

We need ALL of our readers to keep a close watch on the welfare of the brave Teacher who spoke the TRUTH and help prevent her from bearing the brunt of corrupt ESS Martren vindictiveness for TELLING that truth.

This quote also verified that this Sandimic, including the “Soft Launch in Quicksand” and ill-fated “Hard Launch in Fantasyland”, has been designed to produce absolutely ZERO EXPOSURE RISK to the corrupt and incompetent Marten and Barerra duet.

Here are the REAL facts from the nonexistent SDUSD Soft/Hard rollout “Plan” that prevents any SDUSD Supertintendent/Trustee transparency and accountability for sub-par School District performance:

NO AMOUNT of SDUSD propaganda can cover up this ongoing FLAGRANT EDUCATIONAL BETRAYAL with a TOTAL LACK OF TRANSPARENCY AND ACCOUNTABILITY to SDUSD Students and Families by Marten, Barrera and their senior staff and trustee cronies.

For the first time, our Quote of the Week comes from a brave SDUSD Teacher and clearly exposes the current SDUSD “Soft Launch in Quicksand” due to Marten/Barrera INCOMPETENCE after schools have already been closed for FIVE WEEKS:

““I can’t tell them even where to start,” she said. “Do you have a computer? That’s step 1. Then you have to download Chrome. That’s step 2.” ― SDUSD Teacher