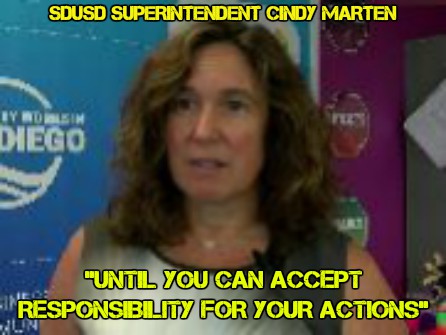 The self-serving Marten earned her title of “Spokesmodel” dating back to her days at Central Elementary where she shoved her face in front of the camera for every possible publicity stunt to further her career at the expense of the Students at Central and now as SDUSD Superintendent…at the expense of ALL SDUSD Stakeholders.

This hunger for media facetime continued through her first couple years as SDUSD Superintendent.

We even wrote a post about it called “Hey Cindy…Wrong Field!”

Predictably, as it became more and more evident she was equally guilty as Marne Foster in the improper and illegal interventions at Lincoln and SCPA, Marten HID from the media…only granting “safe” interviews on camera avoiding investigative journalists in both film and print media.  Marten even managed to delete all previous Board of Education Meeting Videos from the SDUSD website.

It got so bad that reporters had to AMBUSH her coming out of local studio “safe” interviews to get her to talk on camera about her direct involvement in the Foster Scandal.

Now Marten has come out of the closet and embraced the media using the SDUSD “Restorative Justice” PR Propaganda as a way to manipulate the Lincoln Community, the San Diego Unified Police Force and all the SDUSD Stakeholders and Taxpayers.

Marten recently handpicked individuals and groups ignoring the majority of Lincoln Stakeholders , and held a press conference spouting her typical untruthful platitudes that actually convinced some of the gullible local media.

Emboldened by that success and tutored by $10,000 a month carpetbagger PR consultants, Marten gave an extensive propaganda interview to local TV Station KUSI that the SDUSD was happy to broadcast on the SDUSD Website.

As usual with the inept Elementary School Superintendent Marten, she completely screwed up the interview.  During the interview, Marten bloviated on and on using her boring and monotonous “eduspeak” doubletalk that is repeated over and over as if she is speaking to a pre-school class while actually saying nothing with the most words possible.

But then something interesting happened..

Marten incriminated herself and exposed the reason why she can NEVER be a successful or trusted SDUSD Superintendent.

Until You Can Accept Responsibility For Your Actions

You have just eliminated yourself from ever being anything more than a lying, untrustworthy Elementary School Principal!

We have not forgotten…and instead of telling EVERYBODY ELSE what to do, she should LOOK IN THE MIRROR and REPEAT THE FOLLOWING PHRASE:

“ACCEPT RESPONSIBILITY FOR YOUR ACTIONS!”

The removal of ELST’s from schools that desperately need ELL supports (https://districtdeeds.wordpress.com/2014/07/22/sdusd-english-language-learners-feel-the-royal-command-pain-of-superintendent-inexperience/)

The “Brain Drain” of improper terminations and Senior Administrators FLEEING from the SDUSD because of her dictatorial and incompetent management  (https://districtdeeds.wordpress.com/category/brain-drain/)

All of Marten’s Lies to the San Diego County Grand Jury  (https://districtdeeds.wordpress.com/category/san-diego-county-grand-jury-investigation-series/)

All of Marten’s Lies and Alibis Exposed to All Stakeholders in the SCPA Data Dump (https://districtdeeds.wordpress.com/category/marten-scpa-statement-alibis-exposed-series/)

Do You REALLY Think your DOUBLETALK and LIES will continue to Work?

How Gullible Do You Think SDUSD Stakeholders Are?

NOT As Gullible as your Lap Dog Media Buddies!!!

WE WILL NOT FORGET…AND WILL NOT GIVE UP…

BECAUSE YOU WILL NOT CHANGE AND ACCEPT RESPONSIBILITY FOR YOUR ACTIONS!!!

If anything of the recent events nationally by violence between the police and the community has been learned, NO Justice can be served by covering up the video.

DISTRICT DEEDS URGES THE SUPPORT OF ALL SDUSD STAKEHOLDERS FOR THE RELEASE OF ALL THE VIDEOS NOW!!!

IF YOU ARE TIRED OF THE COVER UPS AND LIES BY SUPT. CINDY MARTEN…

1 thought on “Cindy Marten and Lincoln High School – “UNTIL YOU CAN ACCEPT RESPONSIBILITY FOR YOUR ACTIONS.””