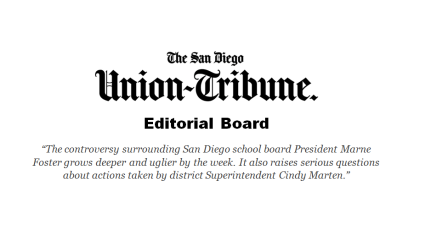 Much of the information describing the scandal surrounding the $250,000 claim improperly filed against the SDUSD by Trustee Marne Foster contained in the Editorial was taken from the Voice of San Diego report by Mario Koran and covered in the the District Deeds post on Monday, 9/15/15.

Andra Donovan, general counsel for the district, declined to comment.

Foster did not respond to a request for comment.

While covering the story, the UT Editorial stated:

Marten declined through a spokeswoman to comment on the latest story. But one way or another, the public deserves to know the answers to the growing list of questions.

To get some additional background, District Deeds decided to review SDUSD Board Meetings on the new SDUSD Website that the SDUSD Chief Public Information Propaganda Officer Ursula Kroemer (who District Deeds last saw running across the SCPA Parking Lot with Marne Foster to avoid being interviewed by Rory Devine of Channel 7/39 San Diego) had described as follows:

“We believe this change is a positive step in our overall efforts to strengthen communication with our parents, prospective parents and community at large,” said Chief Public Information Officers Ursula Kroemer. “Information on our district and school websites is geared toward these audiences and the redesign makes it easier for them to find information most relevant to them.”

In the VOSD Article BOTH Marne Foster and General Legal Counsel Andra Donovan DECLINED TO COMMENT!

In the UT Editorial BOTH Marne Foster and Supt. Cindy Marten DECLINED TO COMMENT!

The Board of Education meeting on Tuesday looked like this:

YES…THE BOARD OF EDUCATION MEETING WAS BLACKED OUT!!!

According to  Wikipedia – Media Blackout:

“Media blackout refers to the censorship of news related to a certain topic, particularly in mass media, for any reason. A media blackout may be voluntary, or may in some countries be enforced by the government or state. The latter case is controversial in peacetime, as some regard it as a human rights violation and repression of free speech.Press blackout is a similar phrase, but refers specifically to printed media.”

So, WE THOUGHT…a couple declined interviews and technical trouble with a Board Meeting…

Going into the 2014-15 archives to review PAST Board Meetings, we discovered…

ALMOST ALL OF THEM WERE INACCESSIBLE!

The July 23, 2015 Board Meeting Video was available…but not 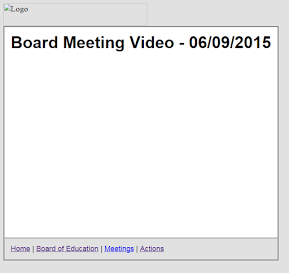 Luckily we captured LOTS of video clips from that meeting…AND RIGHT NOW IT IS THE ONLY PLACE IT IS AVAILABLE ONLINE!!!

To put it another way…

District Deeds, with our $100 budget, HAS MORE VIDEO ONLINE for the June 9, 2015 Board of Education Meeting THAN THE BILLION DOLLAR SAN DIEGO UNIFIED SCHOOL DISTRICT!!

Here is the link for you to check for yourselves: San Diego Unified Board of Education Meeting Archives

It seems like YESTERDAY that we called Supt. Cindy Marten by the nickname of Supermodel Cindy Marten for all of her Photo Ops in  our blog post called Hey Cindy, Wrong Field!

Now, Marten and Foster are “hunkered down” in the Education Center on (ab)Normal Street AVOIDING THE MEDIA like the plague, blocking SDUSD Stakeholder testimony and PREVIOUS FOSTER AND MARTEN STATEMENTS BY ELIMINATING BOARD MEETING VIDEOS and sending their Propaganda Minister Ursula Kroemer out to issue “NO COMMENT” to all media regarding the “Abuse of Power Scandal”.

“A HUMAN RIGHTS VIOLATION AND A REPRESSION OF FREE SPEECH”

My oh my what a little visibility and accountability on their scandals changes the media behavior of Marten and Foster.

But District Deeds has an idea for Supt. Cindy Marten, Trustee Marne Foster, Propaganda Minister Ursula Kroemer and Legal Counsel Andra Donovan that will LOOSEN THEM UP!