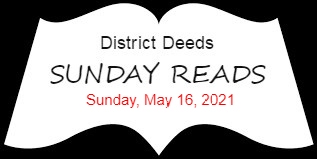 As expected, useless San Diego Unified School District (SDUSD) Superintendent Cindy Marten was politically appointed U.S. Deputy Secretary of Education this past week despite massive evidence disqualifying her from the position.  Politics at its worst.

But there is a bright side…

While this appointment is a horrible outcome for millions of students nationwide, thousands of SDUSD Stakeholders are celebrating her departure.

Although her direct oversight of the SDUSD is thankfully gone, the Cindy Marten Stench of unanswered questions and a new scam by Trustee Richard Barrera involving the Superintendent selection process remain for SDUSD Stakeholders in the near future.

For this Sunday Reads we have started a rough list of issues and questions from the vetting of Marten that MUST be answered, or promise to be investigated, by any and all future candidates for the SDUSD Superintendent position.  We also have dissected the Barrera scam selection process

The best place to start is with actual conditions expressed by SDUSD Stakeholders to the U.S. Senate that ignored the evidence.

There were the 22 questions for Marten that we posted on January 28, 2021.  NONE of them were asked by Senators or answered by Marten.

Here are a few examples:

(2) Why hasn’t SDUSD been able to close a California Department of Education Federal Program Monitoring Review from Spring 2018? Specifically English Learner items 14 and 15—why has it been more than 637 days and the items are still open? Has anyone asked why the textbooks, curriculum and training were not in place over her tenure as superintendent? https://www.cde.ca.gov/ta/cr/unrslvfndgs225.asp

(3) Has anyone seen the recent public records request findings raising questions over $37,000 of relief funding that was used to pay for a lobbying firm? Has anyone asked why SDUSD is putting off the release of the totality of these public records requests given Cindy’s nomination? Shouldn’t the public see what was actually purchased given that these were relief funds and should have been used to support students returning to school? Shouldn’t we see these documents before she is confirmed? https://drive.google.com/file/d/1X6USAD-rHEHjT1JIRf5AfrG-YQkSsdDP/view?usp=drivesdk

(4) Has anyone seen the yearly reports on the disproportionate Black suspension rates in SDUSD from Dr. Luke Wood at San Diego State University? Has anyone asked why three of the principals with the highest rates of suspension were subsequently promoted when Cindy Marten claims she supports social justice and culturally responsive practices?

(6) Has anyone asked why Cindy would train district leaders on how to delete their emails?

(11)  Has anyone asked about the number of non-disclosure agreements issued in Cindy’s tenure? Why does the “be kind, dream big” superintendent need to close so many mouths in the system? How about asking about the principals who have been placed on leave before any evidence that the accusations against them were valid? How about the principal who reported that she was being sexually harassed to her supervisor (area superintendent) and was placed on leave?

(12) Has anyone looked into the relationship between school bond funding and Gafcon?

And here is a list of issues that will need to be addressed immediately that were submitted to United States Senators by a group of local and national “No Marten” advocates:

Through these unanswered questions, the Marten Stench in the SDUSD has endured her departure.

The big question is:

Will the Marten Stench be cleared and will these issues be addressed immediately by Interim Supt. Lamont Jackson and/or ultimately by the Superintendent candidates?

The likely answer is:

Even worse, added to the Marten Stench, Barrera has added his own Stench to the mix.

Based on previous performance, the ridiculous “Superintendent Recruitment and Search Process” created by Trustee Tricky Dick Barrera and Trustee cronies will not answer any of the real questions posed by real SDUSD Stakeholders or produce a highly qualified replacement for Marten.

Instead it will be another Tricky Dick scam, just like the selection of Marten in 2013.

However this time, the Marten Selection Stench deployed by Barrera has evolved into a new odiferous version.

Last time it was a secret Trustee meeting in violation of the Brown act with zero community involvement to select a Barrera/Democrat groomed, predetermined Manchurian Candidate in Marten.

This time it is a LEGAL (albeit corupt) 11 month process with a massive 48 person “Advisory Committee” stacked with Barrera and Democratic Party cronies.  Along with the corrupt compilation of the committee, Barrera will deploy meaningless “Town Hall” meetings run by those same cronies to eventually “choose” his predetermined Manchurian candidate.

This time Barrera is counting that the “appearance” of community involvement in selecting his predetermined candidate will fumigate the selection process of the Marten Stench and get the local press to bow to his scam.

According to an article in the Harvard Business Review (HBR) titled “How to Know If There Are Too Many People in Your Meeting“, to make an important decision, the size of the group is critical:

Just because someone’s name is on your list, however, doesn’t mean he or she must be at the meeting. How many people should you actually invite? There are no hard and fast rules, but in principle, a small meeting is best to actually decide or accomplish something; a medium-sized meeting is ideal for brainstorming; and for communicating and rallying, you can go large. Some people use what’s known as the 8-18-1800 rule as a rough guideline:

In the context of the article, the Superintendent Search Advisory Committee (SSAC) meeting does not qualify as a decision or brainstorming committee.  It is a “rally the troops” committee with virtually ZERO influence on the SDUSD Superintendent selection decision.

This standard Barrera scam is just another version of the DAC, SSC, DELAC, CAC, Calendar, Elections and other “rally the troop” “advisory” committees that the corrupt Board of Education and Marten have chosen to completely ignore since 2013.

The ONLY reason for the SSAC and the “Town Hall” “rally the troops” meetings is to sanctify the corrupt selection process…a classic Barrera manipulation tactic to “distract while victimizing” SDUSD Stakeholders. 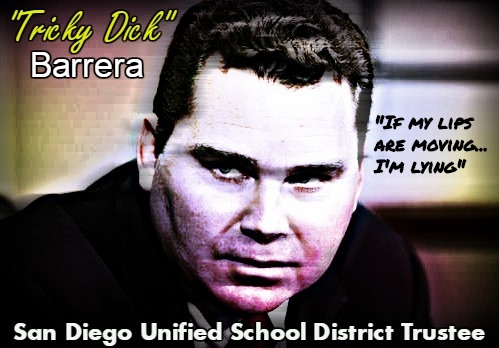 Disgusting Tricky Dick at his worst?

Then, next December after almost a year of delay, that predetermined selection will likely be Manchurian Candidate/Marten sycophant Lamont Jackson who, based on his previous sketchy professional and personal performance, will suckle up the Marten Stench like mothers milk.

When all is said and done, this scam selection “process” by Barrera will have taken almost a year (from February 2, 2021 through December, 2021) to complete with a predetermined weak, but supple, leadership candidate as a result.

To summarize, a total waste of Stakeholder good intentions and effort, an effectively corrupt strategy by Barrera to provide plausible deniability with the press and  his Democrat political backers.

The Barrera/Marten Stench personified…the SDUSD BM Stench all over Jackson…while the educational disaster worsens for ALL SDUSD students!

“You can dress up greed, but you can’t stop the stench.” ― Craig D. Lounsbrough