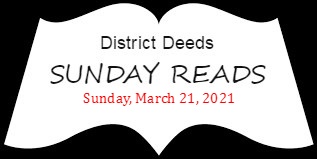 Since the incompetent Marten was nominated there has been a nationwide groundswell of opposition from every state in the union.  Virtually every segment of the SDUSD non-employee, non-crony Stakeholder population have also  strongly condemned this ill-advised nomination.

The newly approved Secretary of Education has been very vocal of his vision for U.S. Education on a number of subjects.  An article in Education Week titled  “Where Biden’s Choice for Education Secretary Stands on Key K-12 Issues” provides an excellent primer to where Secretary Cardona stands on a wide variety of education issues.  It is shocking how many issues that Secretary Cardona supports that Marten either opposes or has magnificently failed to implement during her tenure as SDUSD Superintendent.

From reopening schools to support of Charter Schools to high stakes testing, the positions and actions of Cardona and Marten are considerably different.

But the differences over the key educational policies listed above pale by comparison to the difference between them on the cornerstone of the Deputy Secretary Cardona Education Department platform: English Learners and Students of Color.

As the EducationWeek article mentions:

“Cardona wrote his doctoral dissertation on closing the achievement gap between English-language learner students and their peers.”

This advocacy for English Language Learner (ELL) Students and Students of color has continued throughout his impressive career.  As recently as a week ago, March 14, 2021, he reinforced his belief in that support: 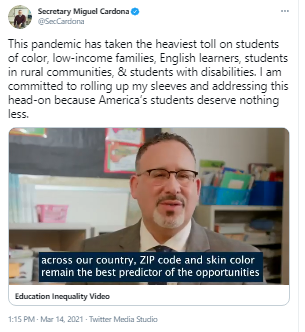 Given how important this issue is to Secretary Cardona, it is shocking how opposed to that position Nominee Marten has been throughout her tenure as SDUSD Superintendent.

District Deeds has chronicled the educational abuse and neglect of ELL Students and Students of color numerous times during the Marten SDUSD tenure.  From the removal of English Language Support Teachers to Lincoln Students calling Marten a liar in a protest at a Board of Education meeting, there is a damning, proven record of Marten negligence.

Back on January 28, 2021 we posted “22 Questions About the San Diego Unified School District Educational Disaster Created by Supt. Cindy Marten That Need Answers BEFORE She is Approved for Deputy Secretary of Education!!!“.

If Secretary Cardona is truly a staunch supporter of the ELL support he espouses in his comments, deeds and actions, he must DEMAND that Nominee Marten publicly answer Question #2 BEFORE she is even considered for the Deputy Secretary role:

(2) Why hasn’t SDUSD been able to close a California Department of Education Federal Program Monitoring Review from Spring 2018? Specifically English Learner items 14 and 15—why has it been more than 637 days and the items are still open? Has anyone asked why the textbooks, curriculum and training were not in place over her tenure as superintendent?

To give our readers full context of that question, we present the following analysis.

On March 8, 2019, over 2 years ago, the California Department of Education (CDE) Federal Program Monitoring (FPM) provided a Notification of Findings for the SDUSD under Nominee Marten.  The report is just a sampling of SDUSD schools but asserts that the local education agency (SDUSD) “is responsible for operating its federal categorical programs in compliance with all applicable laws and regulations”.

Here is the introduction: 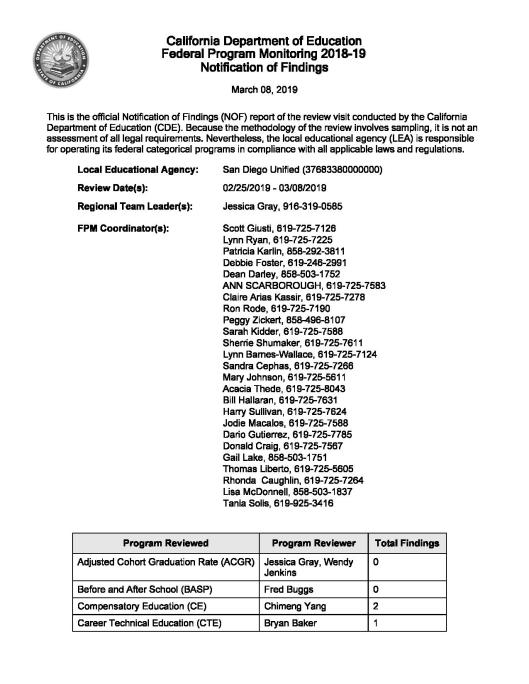 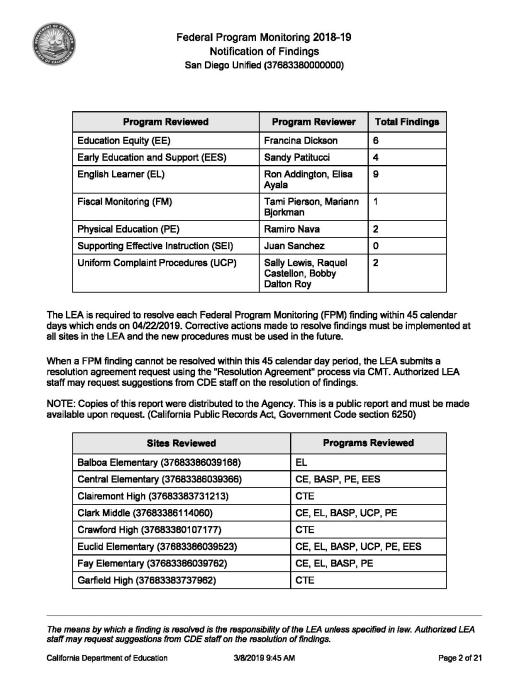 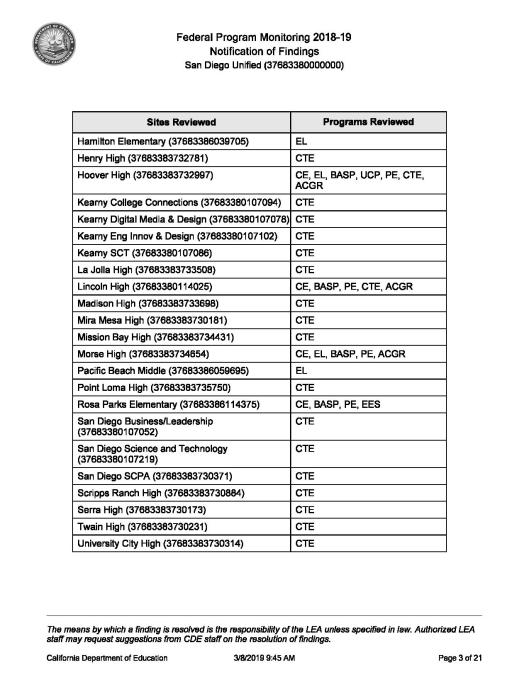 As you can see from the introduction, there are 27 “Findings” that need to be resolved of which 33% (9 items) are directly related to ELL Student supports.

Many of the requests have to do with uploading static documentation plans and policies and physically posting/maintaining  those documents in the prescribed manner but the SDUSD also must take “corrective action” operationally to actually implement the updated policies and procedures.

The SDUSD (LEA) was instructed to respond in the following way:

The LEA is required to resolve each Federal Program Monitoring (FPM) finding within 45 calendar days which ends on 04/22/2019. Corrective actions made to resolve findings must be implemented at all sites in the LEA and the new procedures must be used in the future.

When a FPM finding cannot be resolved within this 45 calendar day period, the LEA submits a resolution agreement request using the “Resolution Agreement” process via CMT. Authorized LEA staff may request suggestions from CDE staff on the resolution of findings.

For 2 years we could not determine when and if each of the 27 findings were actually responded to and/or completed by the SDUSD to the standards of the CDE.

But then we discovered the Unresolved FPM Items Over 225 Days report from December 12, 2020 we listed under the #2 question.

The two unresolved “findings” strike directly at the heart of the Secretary Cardona cornerstone of strongly supporting English Learners and Students of Color and HAVE NOT ben reported as resolved for over 637 days!  We have no way of knowing if they have yet to be resolved so the number of days overdue could have skyrocketed to over 700 days…over 2 years of ELL neglect! 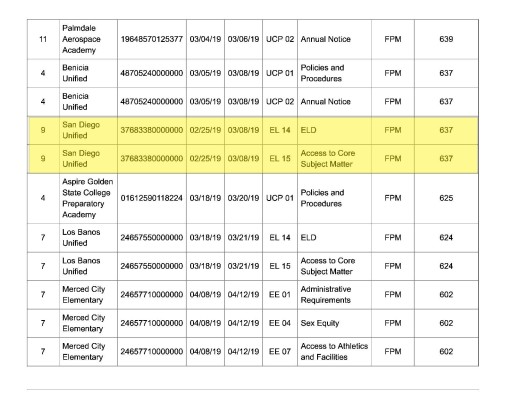 With this knowledge and by posting it for all local and national media to see, we have essentially seen NOTHING from the so-called “Main Stream Media”,

Instead we have decided to do their job on this last weekend before the Marten Hearing and fully explain the relevance of her ELL Support dereliction of duty to Secretary Cardona, the Senate HELP Committee and to President Joe Biden himself. 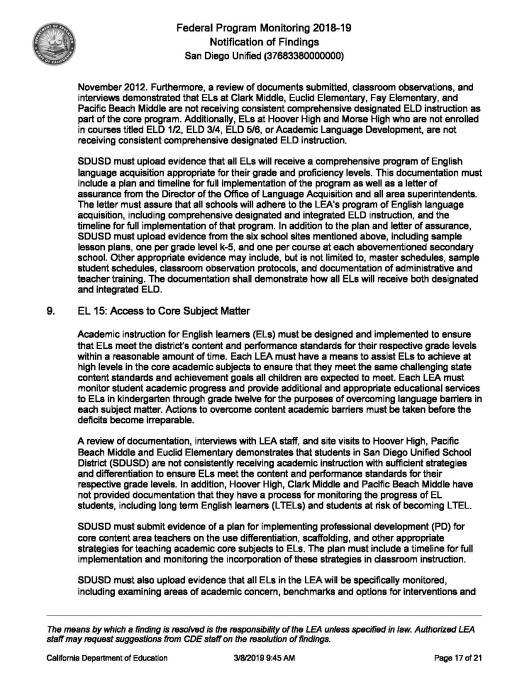 – “core ELD materials are not based on the California English Language Development Standards adopted by the California State Board of Education in November 2012.”

So Nominee Marten, who will be responsible for enforcing compliance by states to federal ELL standards, is not capable of resolving and complying to Federal and State standards for the basic ELL core materials IN HER OWN SCHOOL DISTRICT!

“students in San Diego Unified School District (SDUSD) are not consistently receiving academic instruction with sufficient strategies and differentiation to ensure ELs meet the content and performance standards for their respective grade levels.”

SDUSD “have not provided documentation that they have a process for monitoring the progress of EL students, including long term English learners (LTELs) and students at risk of becoming LTEL.”

So not only has Nominee Marten NOT provided the basic compliant  ELL core materials, but also NEGLECTED to DELIVER those materials, MONITOR PROGRESS of Students and REPORT that progress (or lack thereof).

But this is not just a case of minimal process errors that have no real impact.  As we have shown in the “Inside Unified” series, this neglect by Marten has real life negative repercussions on ELL’s and Students of color.

Here is segment of information from FPM Findings  participant Hoover High School that was a part of the Inside Unified Series titled Whistleblower “Inside Unified” 3 Part Series – Part 2: The REAL San Diego Unified School District Grades and Grading Policy that shows the impact of that neglect on 23% of the Student population.  Please be directed to the “D” and “F” column for critical core subjects like Language Arts, Math and Science: 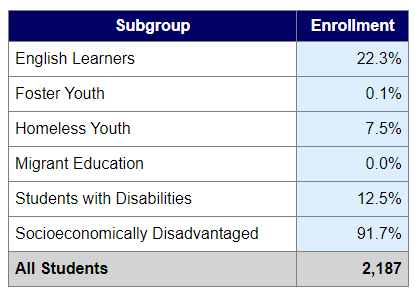 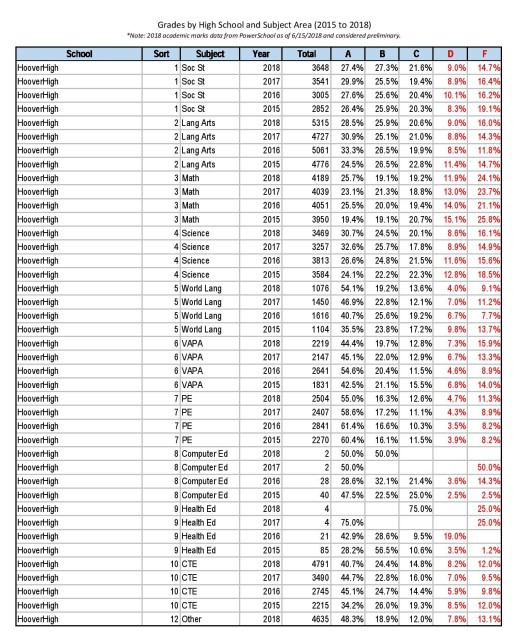 So to summarize, this PORTION of neglect by Nominee Marten to ELL’s and Students of Color:

All resulting in “D” and “F” grades and potentially expanding the school to prison pipeline: 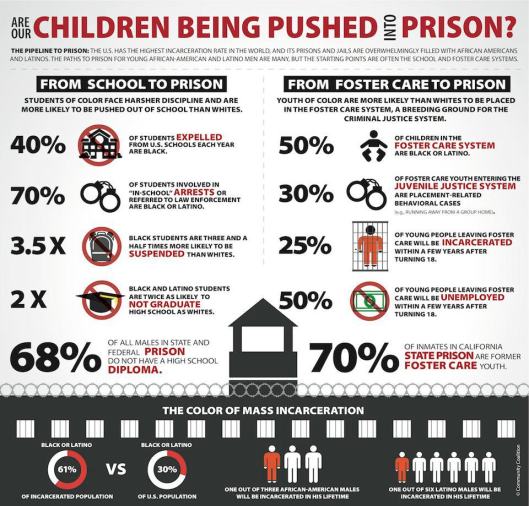 And this is just a FRACTION of the damage Nominee Marten has done to ELL, special education, disabled, foster, homeless, gifted and talented, migrant, Students of Color and ALL Students negatively impacted by the gross operational, budgeting/financial, human resource mismanagement and total lack of leadership during her 8 year tenure as SDUSD Superintendent.

THIS is the impact of educational neglect and incompetence of Deputy Secretary of Education Nominee Cynthia Minette Marten.

PLEASE do not allow her to expand her educational damage to students nationwide!

The quote of the week is for all the organizations, institutions and individuals nationwide that have joined together with articles, Facebook posts, Twitter storms and calls/emails to our U.S. Senators and political representatives locally, statewide and nationally to prevent the damage of a Nominee Marten’s Deputy Secretary of Educations Senate approval.

We thank you for all your efforts and we stand by you and your communities across the United States to help fight for the best outcomes of ALL our Students.

“As we express our gratitude, we must never forget that the highest appreciation is not to utter words, but to live by them.
-John F. Kennedy