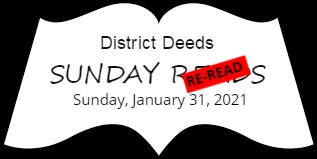 In the critically short nomination timeline of San Diego Unified School District (SDUSD) Superintendent Cindy “In Transit” Marten, we believed that the District Deeds Sunday Reads format should be adapted this week.

For the first time in over 600 posts and the over 7½ year posting history of District Deeds we are providing a new feature called the District Deeds Sunday Re-Read.

This week the SDUSD sent out a propaganda email to families bragging about how the district is “Celebrating” Black History Month.

The following quote is from the disingenuous propaganda email:

The district’s Youth Advocacy department has created a directory of resources for students, staff and parents, and will be kicking off the month with a Black Lives Matter “Week of Action” Feb. 1-5.

The SDUSD typically “checked the box” for racial equity by doing about as little as necessary and devoid of real corrective action. Essentially they highlighted 5 days out of a 28 day month with a canned promotion from BLM at School  with a canned video from their website.

That’s about right for the racial equity effort in the SDUSD under Marten…about 18% effort (5 out of 28 days in February).  That 18% comes pretty close to the English and Math test scores for African American Students in some SDUSD schools under Marten.

This weak effort by the systemically racist SDUSD under Cindy Marten is apparently alive and well, just like the San Diego Branch of the NAACP said back in June, 2020.

And obviously the systemic racist legacy of Marten leadership will live on IF she actually departs.

This Re-Read post is from June 1, 2017, right around the time Marten tried to delete incriminating emails and implement a dystopian LCAP scam.  We decided to provide this Re-Read to SDUSD Stakeholders and Education Stakeholders nationwide/worldwide to expose the REAL performance of Marten, not the manipulated test score/grad rate propaganda spewed by local, state and federal politicians.

What makes this so powerful is that it is a reality check of Cindy Marten though the eyes of Students of color, the future President of the San Diego NAACP, the Lincoln High School Cluster Chair and the head of the SDEA Teachers Union.  This is just a tiny fraction of similar negative public comments regarding Marten from Parents, Students, Teachers, Principals and Staff…and that is not even counting the thousands of private negative comments we have heard regarding Martens poor performance and lack of honesty.

Unfortunately for Families nationwide, the videos from this May, 30, 2017 SDUSD Board of Education Meeting just scratch the surface of the educational disaster and toxic work environment created by Cindy Marten since she was appointed in violation of the Brown Act in 2013…and what WILL happen nationwide if she is approved by Congress.

This is the REAL SDUSD Black History over the 8 Years with Marten as SDUSD Superintendent.

This is the REAL President Biden administration nominee for United States Deputy Secretary of Education…Cindy Marten.

Watch it and weep! 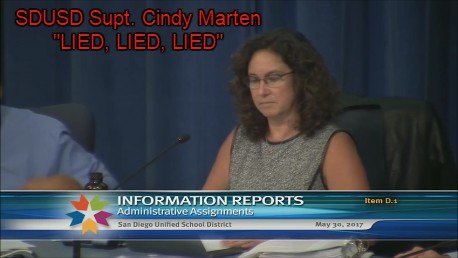 Lincoln High School Students stood up at the Tuesday Board of Education meeting and told the truth to Trustees Richard Barrera, Kevin Beiser, John Lee Evans and Sharon Whitehurst-Payne:

The brave Students who District Deeds reported had been denied adult support in their 45 minute meeting on Tuesday (5/30/17) with Marten, also strenuously objected to her attempts to manipulate them with her disingenuous claims of “I feel your pain” and other SDUSD propaganda lies.

In the following video of the SDUSD Board Meeting you will notice that Marten begins her announcement of the INTERIM Lincoln Principal with a sly. self-satisfied smile shifting uneasily in her seat and then the bottom drops out of her manipulation as members of the Lincoln High School Community call her out for her lies.

Board President Richard Barrera hurriedly called a “5 minute recess” and then had the District Office Technicians edit out the protest and the actual 2 HOUR delay.  When he resumes there is NO MENTION of the 2 hour delay that the public had to stand outside in the cold air waiting for the meeting to re-start.

Here is the sequence from the SDUSD Board Meeting that generated the “5 Minute Recess” to cover up the 2 hour Student and Community protest:

Marten, Barrera and the rest of the Trustees didn’t know someone was actually able to film part of the protest during the 2 hours INSIDE the Board meeting room…here is the video:

Before Marten, Barrera and the rest were able to scurry away, Lincoln High Students were able to call Marten out for the lies she told the students that morning.

And a Pink Slip for Supt.Marten…

On top of it all, SDEA (Teachers Union) President Burningham claimed she was “pushed” by one of Supt. Cindy Marten’s henchmen during a protest earlier in the day outside the Board Meeting Closed Session…

Here is the SDEA claim:

WOW…the Marten administration toxic work environment must be unbearable for Central Office employees having to deal with her incompetence every day!!!

We have reports from the Lincoln community that the Supt. Marten propaganda machine has misrepresented the Lincoln High School situation to numerous local media outlets to attempt to sway public opinion.

District Deeds will continue to be report the REAL story at Lincoln High School and throughout the SDUSD in upcoming posts…Stay Tuned!!!