The incompetent Superintendent Cindy Marten and crony Board of Trustees refused to listen.

We warned you…and this is just the beginning.

“Trash, food, and human waste can within hours of exposure attract disease-carrying pests such as  rats and cockroaches which can eat such waste, produce their own disease carry waste, multiply, and further infest schools as vectors for even more disease.” – Custodial Crusader

A little over a month ago, Marten and her crony Trustees Barrera, Evans, Beiser, McQuary and Payne approved the budget that made the “Horror” come true.  We profiled that harmful, incompetent decision exactly 1 month ago, July 25, 2017 in “FINAL 2016/17 BOARD MEETING DISASTER DUMP – Part 4: Filthy Schools for All“:

“Buried in the 5,576 “Human Resource Actions” are the double digit layoffs, retirements with no replacement,  and reductions of hours for Custodians across the SDUSD. This is the approval of what District Deeds Whistleblower “Custodial Crusader” warned us about on 2/3/17 in “The “Horrors” of Custodial Cutbacks“.

With this serious cutback in safety and health support, there will be many schools on a 5 day cleaning schedule at one time or another throughout the 2017/18 school year

That 5 days will allow rats, cockroaches and other pets to carry diseases to our students classrooms and playground areas.

That means that there will be 5 DAYS between cleaning an area contaminated with rotten food, drinks and vermin feces where our Students will eat, sit, play and learn.”  – District Deeds

Now the proof of those predictions are coming true.

Melanie Vigil called 10News after she found used condoms, dead rats and empty alcohol bottles near the school on her morning walk.

And the reason for the disgusting and unhealthy campus was EXACTLY THE SAME as described by Custodial Crusader and District Deeds:

Balboa Elementary School principal, Hector Bravo, told 10News the school is the victim of budget cuts. Right now, they only have one full-time custodian getting the classrooms ready for their first day.

Ms. Vigil posted pictures of the disgusting result of Marten and Trustee budget decisions on her Facebook account “Chicano Poet Society” along with the following post:

Chicana702 is at an inner city elementary school, where kids start their first day on the 28th. The school is littered with the most unthinkable debris. Used condoms broken bongs, trash, alcohol bottles, dead rats, and more. She is reaching out to the community and the San Diego Unified School District. If you want to donate your time to help clean it up please respond to this post. We need a landscaping company to donate their services to remove dead bushes and debris.

” This breaks my heart and I am calling on all who care about how these kids start school.”

Here is the video:

How horrible is it that a SDUSD Stakeholder has to beg PARENTS to “step up” and take the role of Custodians and clean up dead rats, drug paraphernalia and used condoms at their kid’s school?

Adding to the horrific situation is the sweltering hot first week “early start date” (rammed down the throats of SDUSD Stakeholders by Marten) that will make the rotting food, dead rats, and feces decompose that much faster.

Schools will have a reduced Custodial staff and all Site Students, Teachers and Staff will have to exist in a sweltering hot, seriously contaminated and diseased school site environment that progressively gets worse.

Instead of Parents “stepping up”, District Deeds believes that it is about time the SDUSD Board Trustees “step up” and fire the person responsible for this health disaster…unqualified Elementary School Superintendent Cindy Marten.

Here are some of the pictures: 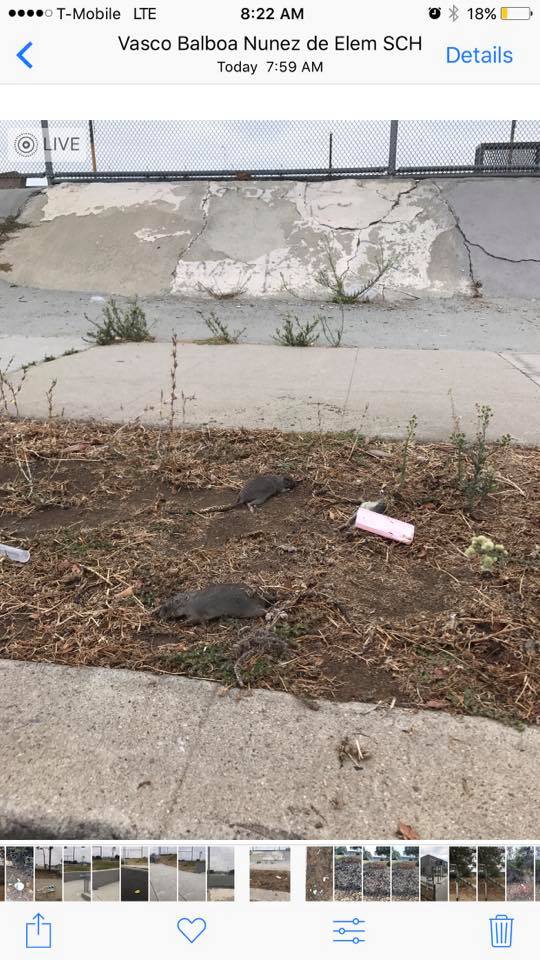 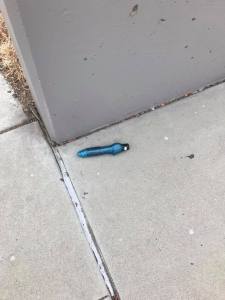 Meanwhile, on August 22nd, the day before the Channel 10 report, “Super Model Marten” (nice haircut), instead of reviewing campuses and discovering disastrously unhealthy schools sites (doing her job), was on Channel 8, spreading her phony “Back to School” lies.

Lies about “all the SDUSD schools having their own “wellness plan”…but neglecting to mention what type of “wellness plan” is built around dead rats, drug paraphernalia, animal feces, used condoms and trash.